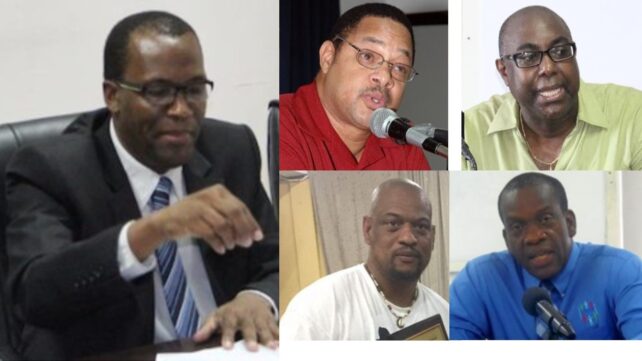 The arrest over the weekend of former United Workers Party senator Dr. Thomson Fontaine, has been drawing strong criticism from a number of prominent Dominicans in Dominica and overseas.

Dr. Fontaine was arrested at Melville Hall Airport upon his arrival in Dominica on Saturday, April 23. The former IMF economist who, for the past four years, has been employed as Economic and International Policy Adviser to the government of South Sudan, Africa, was arrested by the police who were executing a bench warrant issued for his arrest in 2018.

In 2018, Fontaine was among UWP members including Opposition Leader Lennox Linton, former prime minister Edison James and current Speaker of the House, Joseph Isaac, who were charged by the police with incitement.

The defendants are accused of unlawfully inciting people and jeopardizing the public safety order and public peace,  contrary to law, following a public meeting in Roseau on February 7, 2017 calling for the resignation of Prime Minister Roosevelt Skerrit.

After having been adjourned to March 2019, the matter was suddenly moved to November 22, 2018 at the request of lead prosecutor, Trinidadian Senior Counsel, Israel Khan.

However,  Fontaine, who was summoned and served to appear in court was absent and his lawyer, Gildeon Richards, told the court that he was not able to account for Fontaine’s absence.

Gabriel Christian, a Dominica-born attorney based in the US, is among a number of Dominicans, here and abroad, who have raised their voices in condemning the arrest of Thomson Fontaine.

Christian has called on the Government of Dominica to release Dr. Fontaine immediately.

“We asking for peace in our country… we are calling on all Dominicans to rally for the call, for the immediate release of Dr. Fontaine, the protection of his dignity and our democracy at all cost. We shall spare no hazard in that regard, and we shall stand to our duties…you can take our lives, but you cannot take our spirit.” Christian said in a zoom meeting on Saturday evening.

Justice Irving Andre who also participated in the meeting, noted that there was no legal requirement for Fontaine to have been arrested immediately following his arrival in Dominica.

“They could easily have advised Dr. Thomson to report to the police station at a certain time on a weekday so that whatever it is that they have against him can be dealt with [in] that type of fashion. There’s no apparent reason why that should not have been done,” Justice Andre said.

Andre added that what makes the situation more concerning is that Dr. Fontaine has been a vociferous critic of the [Dominican] political directorate which he said raises the question as to the quality of justice that exists in Dominica.

“And it seems to me that again, these acts by state agents throw into question the quality of justice that we have. Do we have a system that works very efficiently and expeditiously when it involves, someone who is known to be an opponent of the political directorate?”

Dr. Fontaine’s safety is of utmost concern to Dr. Dale Dangleben, another US-based, Dominica-born professional, , who confessed to being “shaken up”, “frustrated” and angered by the situation which had befallen his good friend and former teacher.

“My concern right now is the safety of Dr. Thomson Fontaine and we know that there’s been human rights violation and police brutality in Dominica and quite a few people have been beaten to death in police custody down there and we’re dealing with an unstable dictatorship,” stated the Pennsylvania-based trauma surgeon. “A lot of good Dominicans have been vilified by this current government, making good people look bad and being arrested repeatedly.”

Dangleben continued, “My appeal to the Dominican people is Fontaine has done a lot for Dominica. Not just from teaching us when he was a young teenager, but throughout his career and trying to represent Dominica in the best light and what does he get? He lands in the airport and he gets arrested and taken down to the prison and we don’t know what’s going on with him.”

Meantime, Leader of the opposition, Lennox Linton, who spoke outside of Police Headquarters on Saturday night – the night Fontaine was arrested – said it has been four years since this court case started and it has gone absolutely nowhere.

“The last time we were in court two weeks ago, the magistrate sitting on the case recused herself with no reason…but all of a sudden Fontaine’s absence became such a great importance that it was necessary to issue a bench warrant for his arrest to appear in court on  a case that has gone nowhere for four years.”

He said the police seem to know every little detail to harass members of the opposition and persons who exercise the right to stand for themselves.

“I am sick and tired of all of these [infringements] on the freedom of people and their rights,” he stated.

The UWP leader insists that Fontaine’s arrest was politically motivated.