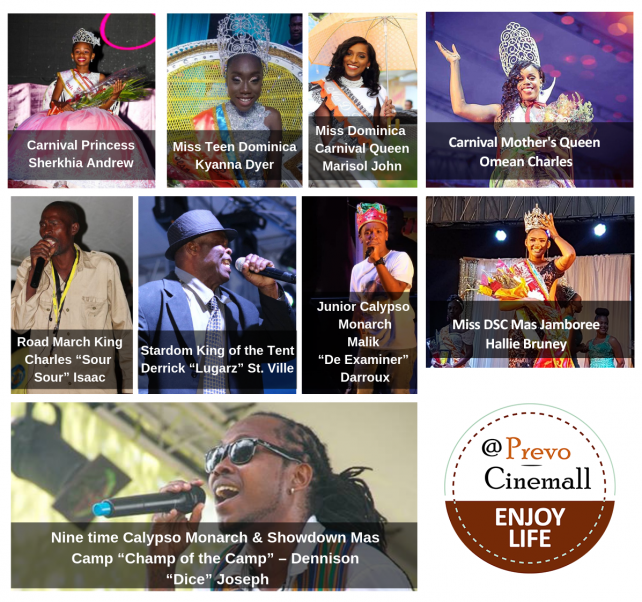 The entire Prevo Cinemall family would like to congratulate the individual winners of Mas Domnik 2019. Well deserved!

The Kings & Queens of the BIG SHOWS

Dice has risen from a young boy from Boetica competing in the Junior Calypso Monarch in 1998 to winning the National Calypso Monarch title 9 times, the most titles to be won by any competitor in history of Dominica’s Calypso.

This year Sour Sour’s hit song “Grinder” was the song for the road. Sour Sour first tied for the Road March title with the Hurricane in 1994 with his song titled “Cool Pipe”. He won again in 2011 with “No name, No warrant”.

“Karessah,” is the song which gave Lugarz his big win. This is Lugarz’ second win in a row, as he won last year with his rendition “Maria Make She Wet”.

The Kings & Queens of the Junior Events

Hallie of Thibaud also picked up the awards for Miss Photogenic, Best in Runway, Best in Evening Wear, Best Thematic Wear and Best Response to Question. She continues to aim high as she hopes to compete for the title of Miss Dominica someday.

16 year old Malik “De Examiner” Darroux has made the St. Mary’s Academy proud by winning this year’s Junior Calypso Monarch with his song “An Example”