High Court Judge, Bernie Stephenson, has issued a ‘gag order’ on the media covering the May Criminal Assizes warning that persons charged or convicted of sexual offenses should not be named.

“I am warning that no media house or individual should publish the name(s) of any person charged and or convicted of any sexual offense,” she said at the opening of the May criminal assizes on Wednesday. “You are to only use initials.”

The judge warned that anyone who goes against the order “will face the full force of this court.”

The judge’s order appears to contradict Section 38. 1 b of the Sexual Offences Act  of 1998 which states that the name of an accused can be published “after the person has been tried and convicted of the offence.”

However, the Act makes it clear that the identity of an accused person in a sex crime cannot be published while the matter is before the court.

“After a person is charged with an offense under this Act, any matter that is likely to lead members of the public to identify a person as a complainant or as the accused in relation to that charge shall not be published in any written publication or be broadcast in Dominica…” section 38.1 of the Act reads. However, that section of the Act as stated below, gives two exceptions in which the name of a convicted sex offender may be published: 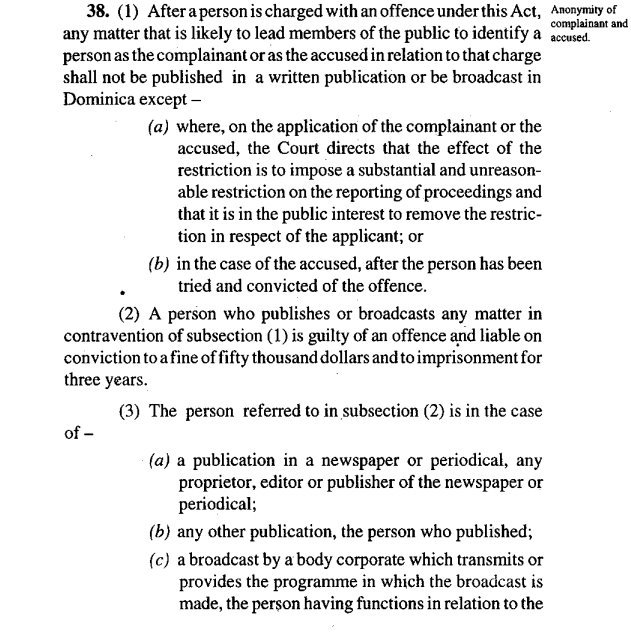 At the end of the January Criminal Assizes, it was reported in the media that Stephenson had criticized Dominica News Online (DNO) for publishing the name of a Canefield bus driver who was convicted of having unlawful sex with a minor and sentenced to nine years in prison. She said then that her position on the matter was not in an effort to to protect the accused but rather the identity of the victim.

Meantime, only one person pleaded guilty during the assizes and will be sentenced on June 2 after a social inquiry report has been made.

The matter is of a sexual nature.

Among the cases on the list are incest, buggery, unlawful sexual intercourse and unlawful sexual connection, theft/burglary, causing death by dangerous driving, wounding/grievous bodily harm, among others.