He was first taken into custody by the police on Sunday February 12, 2017, around 2:00 pm and brought to Police Headquarters for questioning. He was released around 6:00 pm on that day with instructions to return at 9:00 am on February 13, 2017 for further questioning.

Moments after his release on Monday, Fontaine told jubilant and cheering supporters who had gathered and camped outside Police Headquarters, that the police are alleging he incited people to overthrow the Skerrit administration and he has denied the accusations.

As he walked through the police erected barricade with his lawyer Gildon Richards, Dr. Fontaine raised both hands in the air as a sign of victory and told the people that he was released with “no charge.”

“After some four to five hours of questioning, I was let go without any charge. There is nothing that this government has on me…these were all trumped up charges,” he said.

He explained what took place.

“They first accused me of attempting to overthrown Roosevelt Skerrit; they accused me of paying people to burn places during the protest on February 7, 2017, without a shred of evidence. All those accusations were made against me…all false and they’ve decided that they have nothing to go on and so they released me without any charge,” Dr. Fontaine stated.

He said that he adopted the same approach as he did the day before and answered no questions. 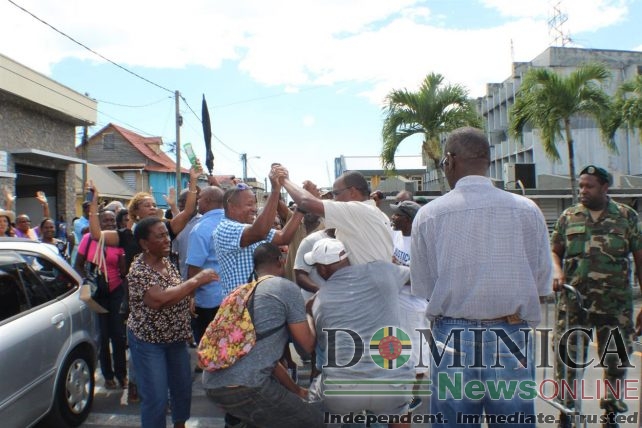 “They continued to ask me questions and I gave them no answers…I adopted the same stance of February 12, 2017 and refused to answer any of the questions posed to me…I told them I was not guilty of any charge and was not going to answer to any questions,” he remarked.

Fontaine also said he will be reviewing his legal options since the accusations are severe.