As the country prepares to celebrate its 39th anniversary of Independence, Dominicans are being encouraged to join hands to build a brighter future together.

The government of Dominica and the Independence Committee in collaboration with a number of partners, including private sector institutions, has presented the programme of activities for this year’s Independence Celebrations.

“Every year a theme is chosen to echo a call to our nation on our contribution to making Dominica the best place to live, to visit or vacation,” Culture Minister Justina Charles said while addressing the launching ceremony. “This year’s theme: ‘Building a Brighter Future Together’ is again calling on us all to set aside our differences, place the development of Dominica at the center of our focus with a view of passing on island that our present and future generation can safely enjoy.”

According to Charles, the word togetherness implies that it cannot be a concern or the business of a few.

“As small as your contribution may be, we can all do something to realize the Dominica that we are aspiring to build,” she remarked.

“It is again a further call for all hands to be on deck,” Charles added.

She stated that the theme captures the goal of all the country’s development projects.

“As we attempt to bring this theme to life, let us each ask ourselves, what can I do to attract people to our shores that can boast our economy?” she stated. “What can I do to improve the quality of service that I deliver in my field of work or to make my department more effective and efficient?”

She continued, “What can I do to maximize the use of resources at my disposal to improve my environment…?”

In fact, Charles said, the Independence celebrations tend to bring out the best in all Dominicans both local and out of state.

“It is one of the periods when we normally put aside many of our differences and celebrate our culture, celebrate our achievements as a nation in the spirit of togetherness,” she noted.

Charles said the contributions made by Dominicans will definitely impact the country’s present and its future.

“Therefore, you are doing it not just for others, but for yourself and your future generation,” she stated.

She called on all Dominicans to come together to help build a brighter future, “for ourselves and for our children.”

Meantime, Chief Cultural Officer Raymond Lawrence call on all Dominicans to recommit their efforts to help build a brighter future for themselves and to carry out those efforts in a spirit of togetherness and purpose.

He said with this theme, “we are entering in another Independence season and we are also entering into a new commitment to cooperation and building, and striving for what is best for Dominica and for us as a people.”

Lawrence stated further that persons are aware that the country cannot be rebuilt without the help of the Almighty Father, “and so we give him all the thanks and praise.”

He encouraged Dominicans to continue to celebrate the country’s culture.

“Let us together be truly responsible for the further development of our country…,” he stated.

He mentioned that very soon the reunion committee will be holding a media launch of the reunion year activities and what is being planned for the occasion.

“That is something to look forward to,” he stated.

Lawrence encouraged all Dominicans to join together in prayer for the nation and to dress in national wear when they attend church services on that weekend.

He stated that the celebrations will open with an exciting ceremony on the playing field in Dublanc, on Saturday 23rd September from 5:00 p.m.

He said Dominica History Week will be held from October 2nd to October 6th with the theme: 50 years of Self Government from Associated Statehood to present”.

Lawrence went on to say that this year Heritage Day will be held in the village of Scotts head on Sunday 22nd, October from 10:00 a.m.

“The church service will be held at the Soufriere Catholic Church, while the rest of the day’s activities will be centered at Scotts Head,” he revealed.

The ‘National Emblems Week’ and ‘Shop Dominica’ two new activities which were added to the calendar of events last year will also held this year.

The celebration ends on on November 4th which is the National Day of Community Service.

See full programme of activities below. 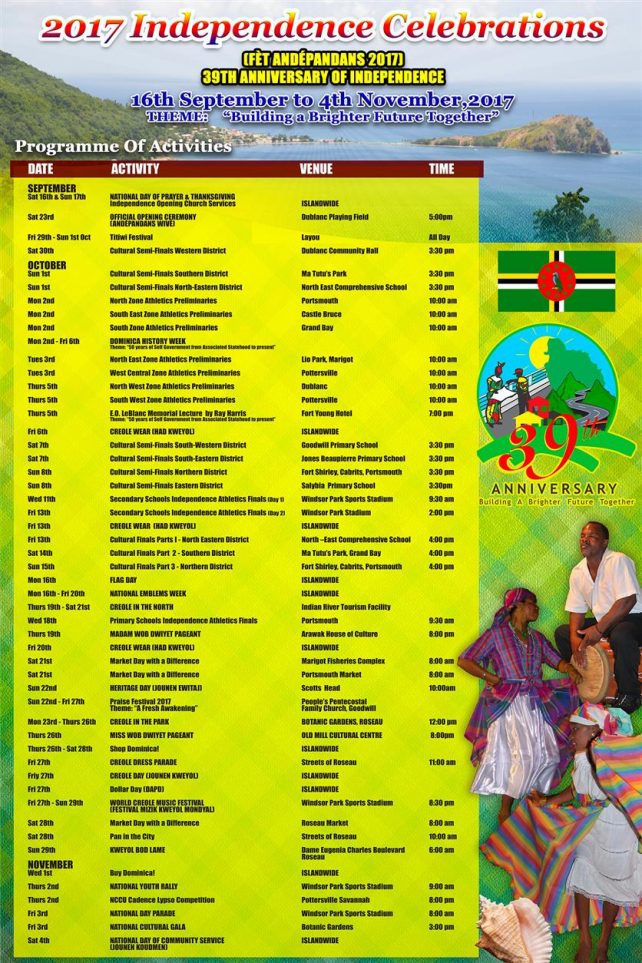