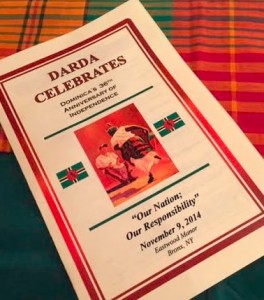 Approximately 300 guests joined DARDA in its annual cultural extravaganza, which included entertainment such as traditional dances like Flirtation, Heel and Toe, and Bele performed by “Know Your Culture Dance Group” (under the supervision of Sabeniah George Mingo) and live music by a Jing Ping band.

Guests were encouraged to dress in National Wear, which was highlighted during DARDA’s traditional National Dress parade, and enjoyed dancing to good music provided by DJ Ron-B of “A Fu Awe Sounds International Entertainment”.

Also in attendance was His Excellency Vince Henderson, Permanent Representative and Ambassador to the United Nations – who briefly addressed the crowd, Dr. Carissa Etienne, Director of Pan American Health Organization/World Health Organization (PAHO/WHO) – who was recognized for her contribution to her field and representing Dominica with pride, and former DEONJ Wob Dwiyet Shenell Edmonds and Madame of Madames Wob Dwiyet Northeast Justina Henderson.

DARDA is a non-profit organization aimed at helping the underprivileged of Dominica.

The National Day function is DARDA’s largest fundraiser and proceeds generated from the event will be donated to various worthy causes throughout Dominica.