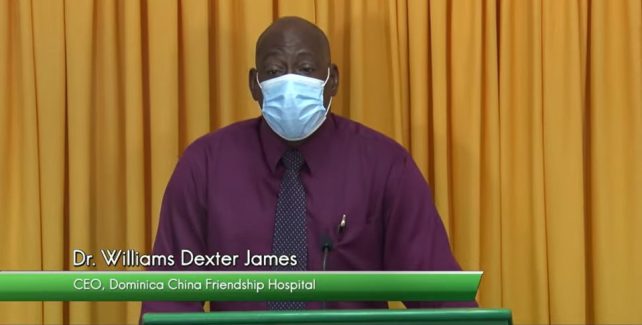 An investigation has been launched following complaints as it relates to fees charged to access healthcare services at the Dominica-China Friendship Hospital (DCFH).

Over the last few days there have been concerns expressed by the public via social media about access to services at the country’s main hospital. There is a particular concern about the reported refusal of emergency care to patients until they were able to pay upfront.

These reported incidents have led to speculation about the administrative arrangements at the hospital as it relates to the application of fees.

“I am here to address the concerns because these concerns are very troubling to the Board of Management,” Chief Executive Officer (CEO) of the Dominica China Friendship Hospital (DCFH), Dr. William Dexter James said while addressing a press conference on Wednesday. “I deeply apologize for it and it is a matter that is under investigation at this point in time.”

Dr. Williams stated that access to healthcare services and by extension, hospital services, will not be denied to any person who presents for care whether they can pay or they cannot pay.

“We are bounded today by the statutory rules and order number 27 of 2011 which spells out the fees to be charged for both residents and non residents presented for care at the hospital,” he stated.

Dr. James continued, “We therefore cannot change those fees because we are duty-bound by law to abide by those fees.”

He described the situation that occurred in the Accident and Emergency Department as an “unfortunate one, because the department of its nature is set up to deal with persons in lifesaving or life threatening situations or traumatic situations…and therefore it is not expected that the whole question of fees is brought into the picture as it relates to persons presented for traumatic situations.”

Come to us and make complaints about our servants,” he urged.

The DCFH CEO advised members of the public who have a complaint relating to care and treatment provided to them at the hospital, to call the quality department at 266-2019 or 266-2183. Those who wish to send complaints via e-mail are asked to send them to: pmhqualitydepartment@dominica.gov.dm.