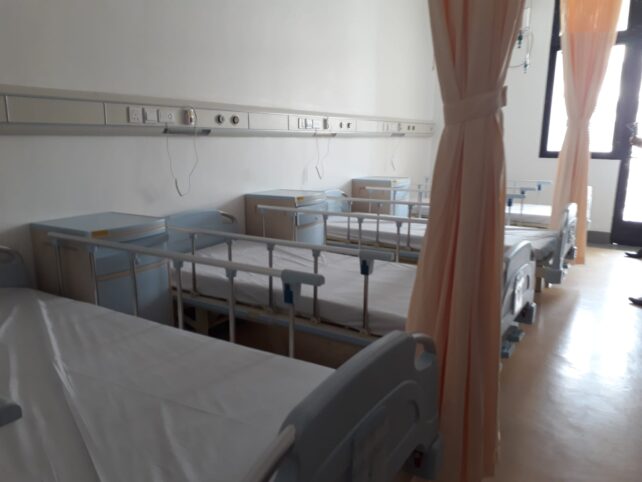 Chief Executive Officer (CEO) of the Dominica-China Friendship Hospital (DCFH), Dr. Dexter James says one hundred new beds have been added to the two new inpatient buildings at the facility in order to improve patient care.

He was speaking during a press conference held at the DCFH last week where members of the media received a guided tour by members of the Dominica Hospital Authority executive team on the inpatient floor.

Dr. James said one of the problems faced at the hospital is not having enough beds for patients to occupy, so the additional beds will help to solve this issue.

“About two weeks ago the Chinese medical team handed over the buildings to us after inspections were completed by their own credentialing authority, so we in fact have possession of the buildings as of today,” he said. “So it is for us now to do what is necessary to fully commission two buildings.”

According to him, this is a major improvement.

He said the layout is, “more than as you can get in any facility in this part of the region.”

Furthermore, Dr. James said the hospital compares favorably with many hospitals in the United States, Canada, and the United Kingdom (UK).

“Because there is this move now towards preserving patients’ privacy,” he stated.

Dr. James continued, “Our current state is that we have about 219 beds [and] we are almost moving up by about 100 beds in the new facility, so the problems that we currently experience we now have 39 beds on our medical wards.”

He added, “We are almost doubling it into 60 in the new facility.”

Dr. James went on to state that those increased beds will improve bed management significantly.

He said patients no longer have to wait in the Accident and Emergency Department for a long time, “because we simply cannot find beds.”

The new facility also includes an auditorium to accommodate about 200 people and a lecture room, rooms for nurses as well as bathrooms.

The two new facilities are expected to be commissioned this month.