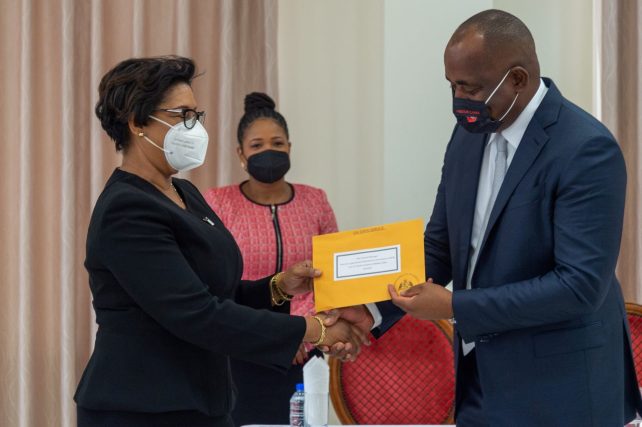 An amount of eight hundred and sixty thousand dollars has been disbursed to the Agricultural Industrial Development (AID) Bank to provide easier access to credit for people of Kalinago ancestry at a concessionary interest rate of 2%.

The Prime Minister stated while speaking at the launch, that such funding which can only be used in the Kalinago Territory, will lift the indigenous people out of economic dependence, increase opportunities for them to build wealth and create avenues for growth in agriculture, enterprise and education.

“It will build capacity and ensure that the people of the Kalinago territory can more actively participate in the social and economic life of our country,” Skerrit said at the ceremony. “The Kalinago Development Fund, therefore, holds special significance and is another such measure designed to enhance the lives of indigenous people. It is the result of an election promise made to my dear Kalingo people prior to the 2019 general elections. That promise was clearly articulated in the dominical Labour Party’s Dynamic Dominika manifesto, as well as in the 2021-2022 fiscal union budget address.”

According to Skerrit, communal land ownership has for many years impeded the progress of the Kalinago people in housing, small business development, agriculture, and education as it has been difficult to present adequate security to acquire loans for self-advancement, from traditional financial institutions like commercial banks and credit unions.

He believes that the KDF  is one step towards helping the Kalinago people overcome this long-standing roadblock.

“From today, the Kalinago people are being afforded easier access to credit to build resilience, sustain livelihoods, increased earnings, and household incomes, and launch financially viable businesses,” he declared. “ It guarantees an increase in employment levels due to a focus on enterprise development in the areas of crop production and processing, offshore fisheries, arts and craft and ancillary tourism industries,” the Prime Minister remarked.

As part of the arrangements, borrowers will be granted a grace period of a maximum of six months on the payment of the principal and interest and the maximum term of the loans shall be up to 10 years exclusive of the grace period.

Skerrit, who is also the Minister for Finance, further announced that government intends to have the fund operate as a revolving fund and gave his commitment to place in the budget over the next five years, a yearly amount of a minimum of $1 million beginning in 2022-2023.

According to the prime minister, this move by his government is the “most emphatic statement” of their commitment to the welfare and advancement of the Kalinago people.

For his part, the Parliamentary Representative for the Kalinago Territory and Minister for Kalinago Upliftment, Cozier Frederick, noted that the KDF is the culmination of several years of intense work which started in 2005 in the office of the Prime Minister when it was referred to as the Kalingo Development Corporation.

Acknowledging the leadership of his predecessors during the process, the minister noted that between 2011 and 2012 a draft constitution was set up for the KDC and developed by the Ministry of Carib Affairs under the leadership of Ashton Graneau.

In  2018, the Ministry of Kalingo Affairs, in collaboration with the Kalingo Council, commenced the process of drafting the framework for the establishment of the KDF.  The following year, several consultations were held in the Territory on KDF documents.

In  November 2021, approval was granted by the cabinet for the establishment of the fund, and its initial administration by the AID bank.

“This KDF will help us in many ways; it will increase our standard of living, create and expand local businesses, provide opportunities for young people, strengthen the Kalinago territory as a tourism destination, encourage local entrepreneurship and more importantly, inspire a new generation of Kalingo leadership,” Fedrick declared.

“I call on my people to take this opportunity to develop serious business enterprises, build business partnerships, be diligent, use the finance appropriately. When we do that friends, we’ll be able to increase our household income, reduce unemployment, and reduce dependency levels,” he added.

To qualify, applicants must be of Kalingo ancestry and any intended infrastructure must be built within the Kalingo space. Prospective business owners wishing to apply must have an established and registered business in Dominica.