A first of its kind 24/7 creole channel, dubbed ‘Dyaman Kweyol’, will soon be launched in Dominica.

Proprietor of Creole Heartbeat and mastermind behind the initiative, Leroy ‘Wadix’ Charles, has indicated that the TV channel which will air on Digiplay, will feature creole content, mainly entertainment. Programmes will include creole news in Dominican and Haitian creole, as well as interviews and documentaries with the aim of “giving the audience a better understanding of who we are, where we came from and to know where we need to go.”

Charles told Dominica News Online (DNO), “Far too often, we focus on creole only during the independence season. We should continue to embrace the creole culture year-round and that is what this new channel hopes to do.”

He said his team is looking to create an avenue for talent and will therefore be looking for media personnel, news readers, graphic designers and others who can contribute positively to the channel.

“We’re looking to get a cadre of talent so what happened last year and the year before where it’s only one media outlet primarily pushing creole, that won’t be the case anymore,” Charles noted, adding, “once we’ve got all the people that we need, what we will do, is recommend the others who were not successful to other media houses so hopefully, they can be added to their team to enhance and spread the creole language here in Dominica.”

The team has also collaborated with the University of the West Indies UWI) Open Campus, creole pioneer Gregory Rabess, as well as Gordon Henderson who has partnered with a French network to also provide content for the channel.

Charles appealed to the business community to come on board pointing to the lack of energy that exists in relation to  to the creole language and Dominica’s culture. He said he fears that if urgent isn’t taken, future generations will be negatively impacted.

“This is who we are; the creole culture is who we are and we have to understand and embrace the fact that God has blessed us in abundance, therefore, I will be doing everything in my power to ensure that the language can be passed onto future generations, so I’m urging everyone to support in whatever way possible that they can.” the creole enthusiast stated.

In addition to the 24/7 creole channel, several other initiatives such as a youth short story competition during the independence season, and a spoken word competition in May, both open to entries in Creole, English and Kokoy, are on the cards for this year to generate, according to Charles, “more discussion on our diverse culture.”

“We have seen what has happened on Creole Day where we only pay focus to the food and the wear and very little on the language, hence the reason we would like to reignite the conversation and allow more people to actually be excited about the language because it is not a difficult language; it is a part of us. It is something that was passed on to us and if we don’t do something about it, it may very well be too late,” he warned.

Anyone interested in obtaining additional information is asked to contact Charles or visit him at the Val Ferry Office in Roseau. 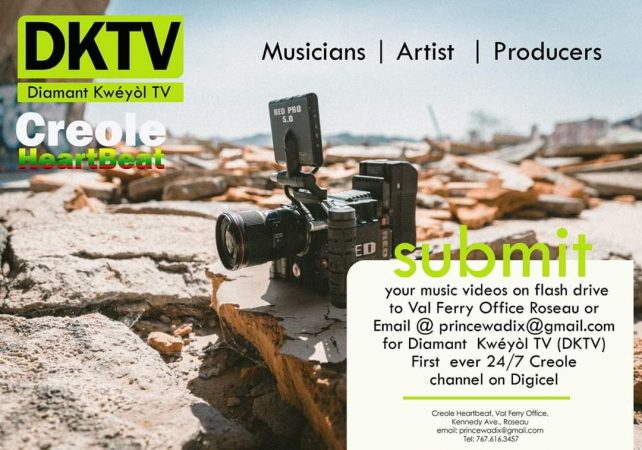