President of the Dominica Nurses Association (DNA), Nurse Rosie Felix says they are “tired, frustrated and fed up” with shabby working conditions under which nurses on the island have to operate and the situation needs to be urgently addressed.

Nurse Felix, along with some members of the DNA, attempted to meet with Health Minister Kenneth Darroux and the Permanent Secretary in the ministry of health, on Monday March 25, 2019, but to no avail.

“We are trying to get the attention of the government and the ministry of health with long outstanding issues. Nurses are leaving in droves; the conditions at which nurses work are bad,” Felix stated.

She continued, “At the Psychiatric Unit, the area is being refurbished in the presence of the nurses and the male patients. Nurses have to wear masks. Three nurses are now on sick leave from the Marigot Health Centre and the place is closed because of mold. In Scotts Head, a nurse just returned from sick leave again because of mold infestation.”

According to Felix, “There are nurses who are operating from their private vehicles giving primary health care. The Mahaut Health Centre is still under tarpaulin. The Vieille Case Health Centre has windows and doors still boarded up.”

She said in Portsmouth, security is still an issue, while in Castle Bruce “the place is cramped and nowhere for the nurses to stay when they are on call. Generally, we are unhappy and dissatisfied with the conditions at which we, as nurses, have to work.”

“We attempted to speak to the PS and the Minister who is out, but the PS, also a nurse, said she is too busy to speak with me. The Ministry needs to meet our union, the Dominica Public Service Union (DPSU),” Felix stated.

Felix told DNO during an interview, “Members of our (DNA) executive are being victimized because they are on the executive. The moral of nurses is just low. At the casualty department, we are being threatened with knives by members of the general public. We are frustrated, nurses and doctors are leaving because of the conditions that we work under.”

She said further, “Our minister of health is a medical doctor and one would have thought that he would be advocating for us, but that is not the case. We are fed up, frustrated and tired of that, and need action. Remember, whatever is affecting nurses is also affecting the general public.”

Felix said that the nurses are demanding that they be provided with positive practice environments as promoted by the International Centre for Human resources in Nursing (ICHRN). 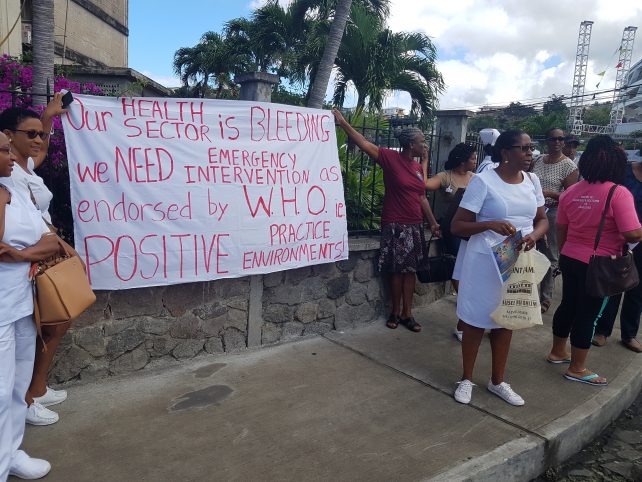