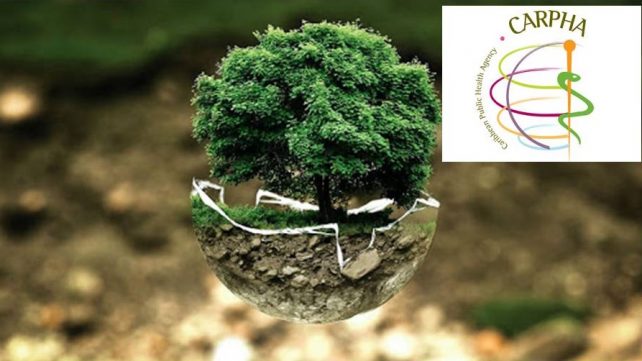 This year’s theme is Biodiversity.

The Caribbean Public Health Agency (CARPHA) recognizes World Environment Day as a time to call to action all governments and citizens of CARPHA Member States to do their part to safeguard Caribbean Biodiversity through: legislation and enforcement, sustainable development, an end to all types of pollution, use of best practices in agriculture, manufacturing, and solid waste management and better education and awareness of its citizens on the importance of Caribbean Biodiversity and how every citizen can participate in reducing ecosystem and biodiversity loss.

World Environment Day 2020 is observed globally aims to increase awareness, care and support for the Earth and the environment. This year’s theme Biodiversity is a call to action to stop the loss of species and degradation of the natural world, both of which are accelerating. Inger Andersen, Executive Director of the UNEP emphasized that “…World Environment Day is a powerful platform to accelerate, amplify and engage people, communities and governments around the world to take action on critical environmental challenges facing the planet…”

Biodiversity is the variety of living things within an ecosystem or habitat (land, freshwater, ocean) that compose life on Earth and encompasses all species on the planet from fungi and bacteria to plants and animals, their ecosystems and the genetic diversity found in them.

What is the state of Biodiversity in the Caribbean?

While ecosystems provide critical support to the wellbeing and development of the Caribbean, they are under threat by human activities. Over 75% of Caribbean coral reefs are considered to be under threat, and over 30% are classified as either highly or very highly threatened (UNEP, 2016). The rates of mangrove loss in the Caribbean are among the highest in the world.

Importance of Biodiversity in the Caribbean Region

Biodiversity and the Tourism Industry. In the Caribbean, the tourism industry represents one of the main drivers of regional economies, thus island biodiversity, marine and coastal biodiversity, forests, and invasive species (lion fish, sargassum), are crucial issues that need to be taken into consideration by the tourism sector. Biodiversity is essential for the continued development of the tourism industry with respect to its role in creating national parks, sanctuaries and reserves, as well as helping to conserve animal species and ecosystems.

What Contributes to the Loss of Biodiversity in the Caribbean?

· Habitat destruction and fragmentation (deforestation) due to demand for food, urbanization, commercial development, and expansion of agriculture and tourism
· Exploitation of plants and animals through overfishing, illegal logging, over-harvesting · Climate change with increased severity of droughts and hurricane intensity, ocean warming and acidification
· Pollution from domestic sewage, solid waste, chemical industries, poor agricultural practices, manufacturing (beverage, paper, pulp), food processing, oil refineries, sugar factories and distilleries. These can have devastating effects on freshwater and marine habitats
· Invasive alien species – prey on and compete with native species for resources and pose a threat to human health (increase in the spread of diseases/viruses), food security and economic development.

Is there a link between COVID-19 disease and biodiversity?

The COVID-19 pandemic is a reminder of the close relationship between humans and the health of the environment. Scientists have indicated that to prevent future outbreaks of zoonoses like COVID-19 (diseases transferred from animals to humans), we must address the threats of loss of habitat (deforestation) and fragmentation of ecosystems. Pathogens thrive in the presence of such changes to the environment and also when ecosystems are under stress from human activity and climate change.

Let us all work together to protect, conserve and preserve Caribbean biodiversity

In observance of World this day, CARPHA has published an e-book titled A Call to Action to Protect Biodiversity.

The e-book includes an address by Dr Joy St John, Executive Director of CARPHA, and highlights the importance of biodiversity to the Caribbean region, the stressors that contribute to biodiversity loss in the Region.  It also looks at the link between COVID-19 and biodiversity.

The Caribbean Public Health Agency (CARPHA) is the CARICOM agency with responsibility for the delivery of public health in the Caribbean Region. The Agency became operational in January 2013 and represents an amalgamation of five Regional health institutions each having over 30 years of experience operating in the Caribbean. CARPHA Member States include a number of vulnerable Small Island Developing States (SIDS) and low-lying coastal states. These SIDS face significant challenges to their sustainable development as a result of climate change, natural and environmental disasters and other global threats. The Environmental Health and Sustainable Development Department (EHSD) of CARPHA leads the environmental protection and natural resources management initiatives and functions as the link between public health and the environment.