Fresh on the heels of opening its first branch office, the Dominica Red Cross Society now has a second branch office and storage facility in the community of Grand Fond. The new office was officially opened on Thursday, June 20, 2019.

Director General of the Dominica Red Cross Society, Sandra Charter-Rolle said the DRCS is playing its role in contributing to Government`s mandate to make Dominica the first climate resilient country. The training of its Branch Volunteers in disaster management and response, educating the communities on risk reduction with a resilience approach, and pre-positioning relief supplies in communities are some of the ways she highlighted as contributions from the DRCS. The aim is to strengthen the capacity of the National Society to provide support in the communities it serves to better prepare and respond to emergencies and disasters while assisting the vulnerable, Mrs. Rolle added.

The Office and warehouse is home to relief supplies and mitigative tools to assist the community when the need arises.

At the opening ceremony eighteen branch members were enrolled as Red Cross Volunteers and will form part of the International Red Cross and Red Crescent Movement. DRCS, President Reginald Winston in his remarks, reminded the volunteers that they should always adhere to the fundamental principles of the Red Cross in undertaking their activities. He noted further that the community should be proud of the facility which will enhance the mandate of the Red Cross.

The Grand Fond Branch office facility which was built with funds donated by USAID/OFDA, will serve the communities of Morne Jaune, Riviere Cyrique, Rosalie and Grand fond. 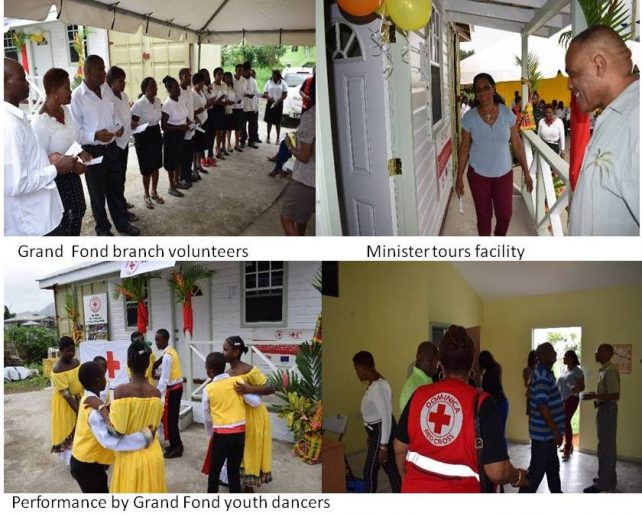