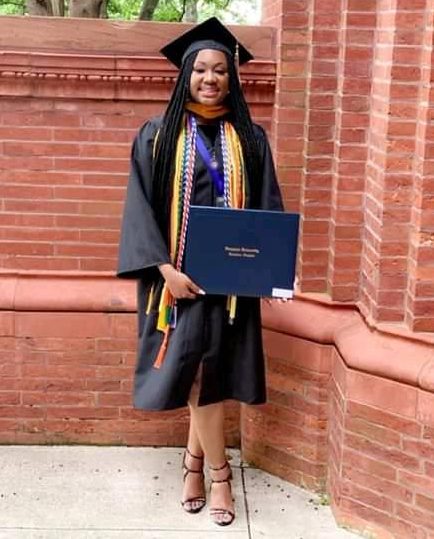 José Joeleene Thomas, a Dominican from “Ah Fu Ah We” country emerges as Salutatorian at Hampton University’s Graduation, May 12th 2019.

Miss Thomas graduates with a 4.029 Grade Point Average (GPA) from the James T. George School of Business. She leaves her top rated and nationally acclaimed historically black university with a Bachelor of Science in Economics, which is accented by a minor in Leadership Studies from the William R. Harvey Leadership Institute.

The following excerpt was taken from the Hampton University Website:

Thomas was born and raised in the Commonwealth of Dominica, and attended Hampton University as an international student. At Hampton, she majored in Economics with a minor in Leadership Studies. From a young age, Thomas displayed a keen interest in academic excellence, which extended into her undergraduate educational pursuits at Hampton. At the end of her primary education, she received a bursary to attend North East Comprehensive School and graduated with six academic awards, including best performance at the Caribbean Examination Council (CXC) for successfully passing twelve CXC subjects.

On April 13, 2019, President William R. Harvey recognized Thomas during the 44th Honors Day Program as the recipient of the President’s Cup. Thomas was also a W.D.C. Harvey Scholar and traveled to Panama in 2018 for an eight-day international service learning and study abroad experience. She also received the President’s Award for her major and minor.

Outside of the classroom, Thomas made it a priority to delve into extracurricular activities. She spent her time over the past four years as a Campus Ambassador for Teach for America, as an on campus tutor for the Student Success Center, and as a Student Researcher and Vice President of the Economics and Entrepreneurial Studies Club. Thomas was also the recipient of the White House Initiative HBCU Competitiveness Scholar award in 2018.

After graduation, Thomas will head to Atlanta, Ga., to work as a Tax Associate for KPMG. Her long-term goal is to be Prime Minister of Dominica.