While the project to erect a sea defense wall at Pointe Michel is two months behind schedule, as reported by Minister of Public Works Rayburn Blackmoore, he still believes that the project will finish on time.

The minister, who was speaking at a site visit to the $32–million project, this morning, said he has urged the contractors for the project to pick up the pace, denying their request for an extension of the time allotted for the project. 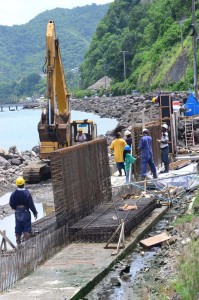 He said, “The project should come to an end in March of next year and I just had a meeting with the consultant and the contractor to impress on them the need to double their efforts, with the expressed purpose of getting the project back on course for the expected completion date. As I speak, the project is about two months behind schedule.”

Blackmoore added, “I have been assured that by next week, they will be pouring an average of six meters of wall per day for the stem of the wall. I hope that as time progresses we will see a greater degree of diligence from the contracting firm and they have given us the assurance that that will happen.”

The project is expected to be a wall 750 meters in length and a significantly improved road that is expected to include car parks, sidewalks and steps to the seashore and a 120X30 meter commercial area that is intended to raise the overall aesthetics of the community as well as its potential for commerce.