“We the boys from Convent Prep, marching down the streets today! We want all our friends to know boys are precious you will see! Convent Prep! CARIMAN! M.O.E!”

Their voices echoes through the streets of the capital on Thursday as two hundred boys from the Convent Preparatory School made their stance on violence and the value of boys in society heard.

The march began on the grounds of the school and it saw members of the Caribbean Male action Network (CARIMAN), fathers and other male figures participating. It formed part of recognizing Boy’s Awareness Week.

Public Relations Officer for CARIMAN, Lester Guye, told DNO that he was impressed with the turnout of fathers for the event.

“We have quite a bit of fathers here and I think that is commendable, I never expected to see so many fathers so I think I need to give the Convent Prep fathers a thumbs up,” he stated.

He said the march is part of tackling roots of the problems that men and boys face and aims “to empower our young boys and young men, through primary school through tertiary level education …”

One of the fathers, Danielle Shillingford, who came to support his two sons said he is trying to be involved “100 percent in everything they do.”

“I’m here supporting my sons who are in this march today and hoping to pass on a message to the rest of the fathers out there who would see and be encouraged by what I am doing,” he stated. “So I hope in the future they remember I am present for them.”

Shillingford carried a placard which read “I have a responsibility to ensure their rights” and he join the others in shouting, “We want all our friends to know boys are precious, you will see!” 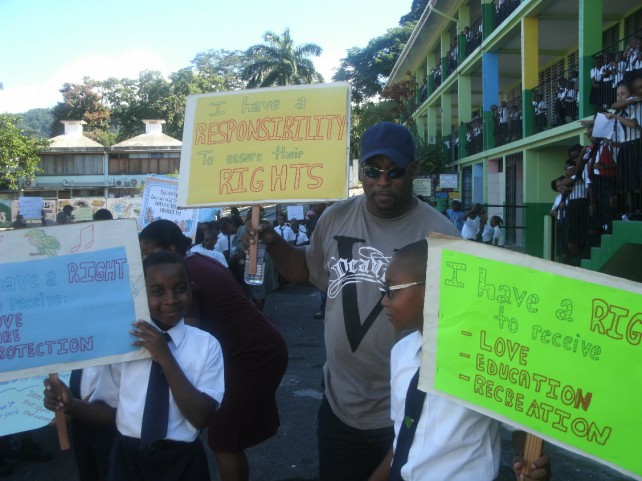