Every student in Dominica at the secondary school and College level are now equipped with a tablet, Acting Prime Minister Rayburn Blackmoore has announced.

The ‘One Tablet Per Child Program’ which is said to have benefited close to 7,000 students across the island was promised during the 2014 election campaign by the Dominica Labour Party (DLP)

“Young people, students, our greatest legacy, by the end of this day the 22nd of October 2015 every student at the secondary school level, and every student at the Dominica State College level will have a tablet,” he said while addressing a handing over ceremony of the tablet devices to students of the Dominica State College (DSC) on Thursday. “We are honouring our promise; we are honouring our obligation…”

According to Blackmoore the DLP gives credence for the fundamental principle that education is not a privilege, “but it is a right.”

“And consistent with that principle we believe strongly that every child, notwithstanding his or her social space is entitled to the highest quality of education,” he said.

Minister for Information, Science, Telecommunication and Technology, Kelver Darroux said the’One Tablet Per Child Program’ will transform the way that information technology is viewed in Dominica.

“It signals a clear demonstration of the seriousness being displayed by the government of Dominica to keep a promise to our young people,” he stated. “We have delivered, we have silenced our doubters and this is no coconut tablet.”

Darroux strongly believes that information technology has played a key role in the transformation of the Dominican economy and the government of Dominica, “will ensure that we have a workforce ready to take on the challenges of the 21st century.”

He revealed that the government of Dominica has invested to the tune of $114,918 for wireless broadband and two internal fibre links at the Dominica State College.

Education, Petter Saint Jean noted that the DSC has served as a pathway to success for thousands of young persons in Dominica.

“Gone are the days when only the wealthy among us could receive an opportunity to go to secondary school or college,” he remarked. “Our education system has evolved.”

Dr. Peters advised students to use the tablets effectively.

Over the last few weeks the government embarked on a drive to deliver tablets to every secondary and college student in Dominica.

The secondary school leg of the ‘One Tablet Per Child Program’ came to an end on Wednesday at a ceremony held at the Convent High School, where students of that learning institution as well as those from the Saint Mary’s Academy and Saint Martin Secondary School were presented with their tablets. 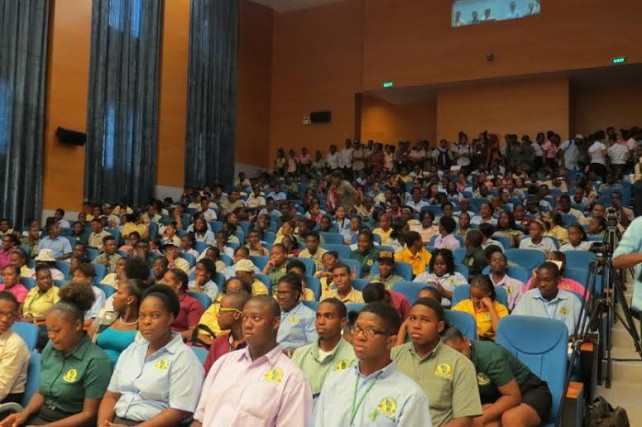