The Government of Dominica has received 200 tablets from one of its agents of the Economic Citizenship Progam, Apex Services.

The tablets were presented to Prime Minister and Finance Minister, Roosevelt Skerrit at a ceremony on Tuesday by President of Apex Capital Partners, Nuri Katz and his local Dominica associate, Kenny Green.

Skerrit said the tablets will be distributed to the children of Dominica.

“On behalf of the Government and the people of Dominica we want to express our gratitude to Apex Services for this very timely gift to the people of Dominica, and it speaks to their commitment to the country, their willingness to participate in the economic and social development of our country,” he said. “They are partnering with us to reach out to the students of Dominica and the wider community is critical.”

According to him, the government is unable to deal with all of the challenges and the needs of its people and benefactors are welcomed.

“We need partnerships, we need benefactors, we need well wishers,” he remarked.

He went on to say that Apex Services has not only expressed this in words but, “they are expressing it in a tangible manner.”

Last year the Government of Dominica distributed well over 8,000 tablets to every to students of all secondary schools and Dominica State College (DSC).

Skerrit said those tablets are being put into “very good” use by the students and teachers.

“Our hope and prayer are that they understand and appreciate the greater good of those access to technology,” he stated.

Katz said having spent quite a bit of time in Dominica he has noticed the government’s move towards expanding the availability of information technology.

“We thought as a company doing business with the people of Dominica trying to bring not only investors to Dominica, but we wanted to make our own contribution to the development of information technology,” he said. “We live in a global world and without this technology that access to that global world would be impossible. We are a global company and we want to encourage globality of the world.” 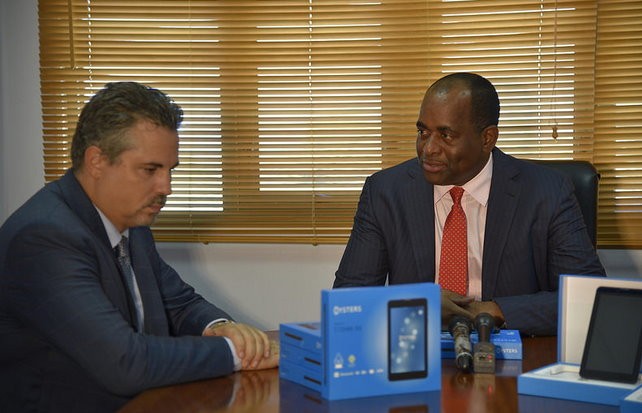