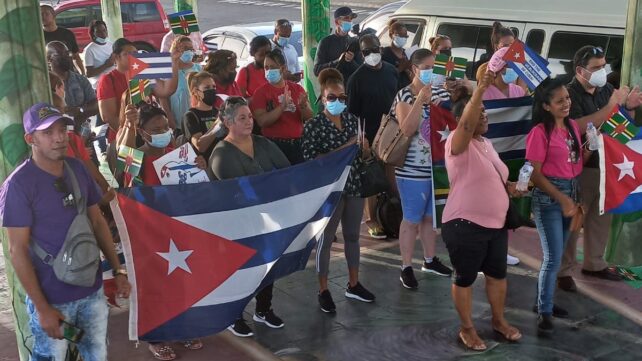 The Dominica Cuba Friendship Association (DCFA)continues to lend its support to the international movement to lift the economic blockade against Cuba.
President of the Association, Dr. Damien Dublin reported the successful staging of a solidarity motorcade in Roseau last week which was organized in collaboration with the Embassy of Cuba in Dominica, to continue to draw attention to the issue.
The United States embargo against Cuba prevents American businesses, and businesses organized under U.S. law or majority-owned by American citizens, from conducting trade with Cuban interests. It is the most enduring trade embargo in modern history.
The embargo has had a negative impact on the Cuban economy resulting in a loss of billions of dollars in trade and other opportunities.
According to Dr. Dublin, during the rally, the solidarity message was conveyed and emphasized in speeches by members of the DCFA, representatives of the Cuban Medical Collaborators, the Cuban ambassador and Dr. John Toussaint who represented the first group of Dominican graduates from Cuba.
Dr. Kenneth Darroux, Minister of Foreign Affairs and himself a Cuban Graduate, also gave some impactful remarks.
“The speakers generally called for an immediate end to the 60-plus years of economic and commercial embargo imposed by the USA . The significant contribution of Cuba to the overall development of Dominica was also highlighted,” Dr. Dublin said.
He added that the Dominica-Cuba collaboration has enhanced Dominica’s healthcare capability with the presence of doctors, nurses, specialists and hundreds of Dominica graduates from Cuba in varied fields which positively impacts the economy.

He pointed out that it was Cuba who sent troops to Africa to help liberate people there as well as sending doctors all over the world to help “stem the tide” during this COVID pandemic.

“Cuba is going through serious troubles because of this inhumane economic blockade imposed about 60 years ago. We think it’s a just and ethical struggle and a call for all who believe in human rights to join this activity of solidarity,” Dublin noted. “We at the association [are] just playing our part from our end as we join with the others on this Global movement, to help lift and end the United States commercial and economic blockade against Cuba.”

The United Nations (UN) has, for the 29th consecutive time, adopted a resolution to lift the economic and commercial blockade against Cuba.