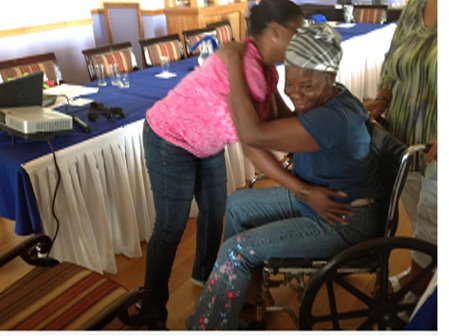 The COVID-19 pandemic is exacerbating a growing problem for seniors in Dominica: elder financial abuse and serious measures to be taken to address this ‘pandemic within the pandemic’ says President of the Dominica Council on Ageing (DCOA), Ophelia Olivaccè-Marie.

Her call came as Dominica joined the international community in observing World Elder Abuse Awareness Day (WEAAD) observed annually by the United Nations on June 15. The day which is observed under the theme  ‘Combating Elder Abuse’ raises awareness about the abuse and neglect of older persons and the cultural, social, economic, and demographic processes affecting elder abuse and neglect.

She continued, “There are people who say they would like to assist our seniors monthly to withdraw money from their books; they get them to agree to sign papers to add their names to the account and they withdraw large sums of money on the pretext of using that money to take care of the older persons. And many times,  the older person doesn’t see one iota of care that would come as a result of that withdrawal.”

According to the DCOA president, the offenders often include those who are trusted to take care of the elderly, including family members, volunteers and those employed to assist them with their daily needs.

“I heard a story about some children who placed their father in the sun and they gave him a pen and a paper and if he didn’t sign, they would cut his finger, and would you believe they cut his finger because he refused to sign for land that is so very painful and when I hear those things, they disappoint me,” she lamented.

Mrs Olivaccè-Marie issued a call to families and other institutions to establish better practices that can safeguard our seniors from such abuse.

“Perhaps be more vigilant; perhaps ask more questions, or report their doubt to somebody who might be able to go further with it, ” she recommended.

According to Olivaccè-Marie, several local lawyers are presently working with the DCOA, oftentimes, pro-bono, (free of charge) to ensure that our senior citizens have access to justice when such matters are reported.

Outside of financial abuse, the head of the DCOA also pointed out that sexual, emotional, mental, and physical abuse to name a few, continue to remain an issue.

As such, she urged family members and caretakers to be on the lookout for tell-tale signs such as a change in behaviour of their loved one, sores on the skin, a change of appetite, or simply, if they look like they have been hurt.

“What gives me great hope is the fact that our country can rally around a little girl who is missing. So we can come together, we can make an issue of one family, one child, the issue of the nation, we should do that more,” she said. “Do that for a vulnerable child; do it also for vulnerable seniors and please don’t be jealous of the little support and aid that they are getting. We are there to take care of them so that when the boomerang  comes back  somebody will be able to take care of us when we get to their age.”

She said the elderlies are capable of building on the skills of the nation as they have done in the past and is therefore, believes that all attempts should be made to protect them.

“We should give them the love and recognition which they deserve so that they can know that they are thought of and loved as human beings.  It’s as basic as that because boomerang and karma have a specific meaning to people who do not take care of the vulnerable,” the DCOA president stated.