British jazz musician, Courtney Pine, has described his performance at Dominica’s 8th Jazz ‘n Creole Festival as “the realization of a dream.”

Pine, a world renowned, award-winning multi-instrumentalist, was the headline act at the main stage event which drew a multitude of patrons on Sunday June 4, 2017 to Fort Shirley at the Cabrits – its venue since the Festival’s inception in 2010.

The internationally acclaimed saxophonist who also had renowned British-based, Dominican-born guitarist, Cameron Pierre as part of his accompanying band, expressed his delight at the turnout of the patrons, especially for his performance, and for the opportunity to perform in Dominica.

“To think that I could play in Dominica at a jazz festival like this, with Cameron Pierre, is something that I didn’t think would ever happen. I just wanted to come here and play because there is such an energy here, positive energy, so I am very happy to be here in Dominica,” Pine said.

Pine made it known that he is willing “to pay money” to come back to Dominica again to share in the music vibes and also, that he has developed a deep love for everything that Dominica has to offer.

“Apart from the women, and the food, and the music, and the air, and the environment, and the people, it’s everything. I even know a few words in Patois,” Pine remarked. 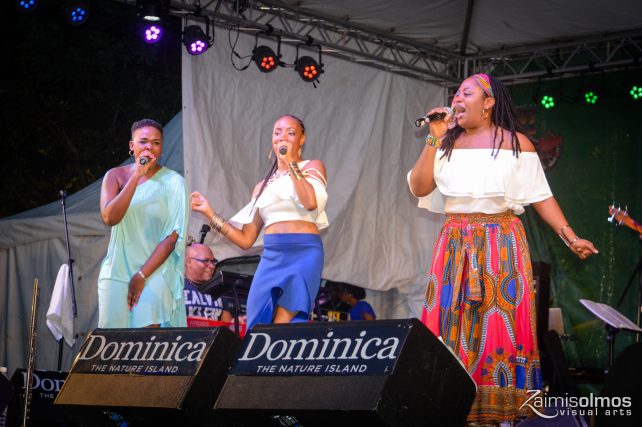 In addition to Pine’s international presence, patrons were treated to impressive performances by various other performers including Michele Henderson-Delsol, Ti Orkest, Breve and a Venezuelan acapella group called  “Vocal Song”.

Speaking at the venue of the event, CEO of the Discover Dominica Authority, Collin Piper, said that despite the inclement weather, he was happy to see the number of patrons that came out.

“…Especially with the weather, for the first time in eight years we have had inclement weather at jazz but yet the patrons came out which is a testament to how they feel about the event. So I guess I am pleased at this point in time; pleased more so for the hard work that the folks at Discover Dominca, Dominica Festivals Committee (DFC), Ministry of Tourism have put into this,” Piper said.

He also said that the various organisations directly involved in the facilitation of this event have every intention of letting this festival grow into bigger and better things.

“It’s just to continue to grow in terms of patronage, but also, in terms of the quality of the event that we put forth. So we are looking at where is the best place to stage it within Fort Shirley as the crowd continues to grow, so that is one of the things we will continue to look at. Just trying to make sure that the quality of the event is such that the patrons can have a good time at the end of the day,” Piper remarked.