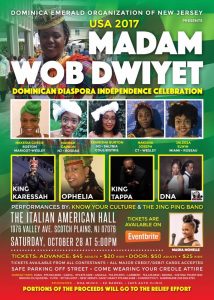 On Saturday, October 28th, 2017 at 5 pm Dominicans in the tri-state area will gather to celebrate Dominica’s 39th anniversary of independence in the 15th annual Madam Wob Dwiyet USA pageant.

The pageant, established in 2003 by the Dominica Emerald Organization of New Jersey DEON-J, is the longest-running Wob Dwiyet Pageant outside of Dominica.

This year five young women of Dominican descent will vie for the title of Madam Wob Dwiyet USA 2017 at the Italian American Hall at 1976 Valley Avenue, Scotch Plains New Jersey.  The location is ideal as patrons can enjoy the pageant in a beautiful venue with plenty of safe off-street parking.   An impressive variety of delicious local cuisine and cold drinks will be available for sale.
The contestants are Jalessa Elwin of Miami who will represent Salybia and Goodwill; Kennisha Burton lives in New Jersey and will represent Coulibistrie and the Carib Territory; Nakisha Joseph who lives in Connecticut will represent for Wesley; Naimah Carbon of New Jersey will represent Roseau and Nakesia Gussie who resides in Massachusetts will be representing Marigot and Wesley.   The evening promises to be one of great excitement as these beautiful ladies compete in Talent, Wob dance and Interview.
The audience will be treated to an array of sizzling talent as we bask in the music of the Dominican first lady of song, Ophelia as she sings “Aye Dominique” and we enjoy the upbeat contemporary sound of Athena Henderson of DNA. Dominica’s 2017 Calypso Monarch, King Karessah will be making his first appearance in New Jersey in what is expected to be a riveting performance. We will also be treated to performances by up and coming reggae artist, King Tappa, Floyd Challenger, a local artist, will be using footage at this event to record a video for his new Hurricane Maria song ‘We Will Rise Again.
In the aftermath of Hurricane Maria this event is even more special as many who had to cancel plans to go  home for the Independence celebrations will now have a place to come together as Dominicans to celebrate the 39th anniversary.   Proceeds will go toward the hurricane relief effort.
Tickets are available at EventBrite or from any contestant or any member of the organization.  More information can be found the Deon j Emerald Facebook page or The Dominica Emerald Organization of New Jersey.  To contact the organization please call Angela Sylvester 732 319 6974 or Daisy Grant at 973 393 1393.