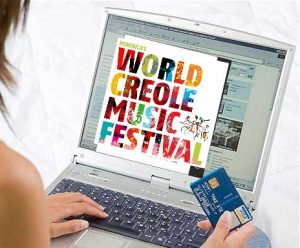 Roseau, Dominica: September 22, 2016 – Tickets for the 19th World Creole Music Festival are available online. This announcement was made by WCMF Project Consultant Val Cuffy today. WCMF tickets can be purchased from www.ticketpal.com at US$125 for season tickets and US$48 for nightly tickets.

The 19th edition of the World Creole Music Festival is slated for October 28-30, 2016 at the Windsor Park Stadium in Roseau, the Dominican capital.
A line-up of top regional and international acts covering a diverse range of creole music from the infectious Bouyon to the sweet sensation of Soca, Calypso, Reggae, Afro-beat, Haitian Kompa to the vibrating sounds of Cadence-lypso and Zouk awaits patrons.