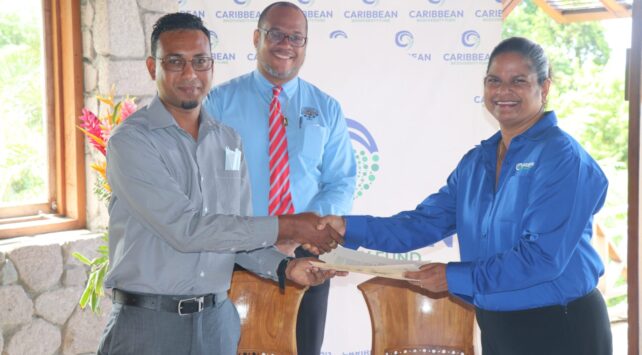 Acting Permanent Secretary in the Ministry of Blue & Green Economy, Agriculture & National Food Security, Dr. Kyra Paul expressed thanks to the CBF and its donors at the signing ceremony held at Jungle Bay Resort & Spa.

“We are grateful to the Caribbean Biodiversity Fund and the German Development Bank for their support of our conservation and sustainable development efforts here in Dominica. Through our National Conservation Trust Fund, we look forward to facilitating projects to further conserve and protect our marine and terrestrial areas,” Dr. Paul said.

Dominica is aiming to become the 11th country with whom the CBF has signed an Agreement to access sustained financial resources from an Endowment Fund managed by the organization. The other countries who have already signed agreements with the CBF to access the Endowment Fund are: Antigua and Barbuda, The Bahamas, Dominican Republic, Grenada, Guyana, Haiti, Jamaica, St. Lucia, St. Kitts and Nevis, St. Vincent and the Grenadines.

CEO of the Caribbean Biodiversity Fund Karen McDonald-Gayle shared “the CBF is pleased to sign this pre-financing agreement with the DNCTF and we look forward to the work that will be done under its governance as it joins the mission of the Caribbean Sustainable Finance Architecture to support activities that contribute substantially to the financing and long-term conservation and maintenance of biodiversity in the region.”

The purpose of the pre-financing agreement is to support the Dominica National Conservation Trust Fund (DNCTF) to make the necessary preparations for the CBF Partnership Agreement that is aimed at conservation and grant making f activities in Dominica. The pre-financing agreement also makes it possible to hire staff and establish the necessary administrative infrastructure for the DNCTF to function as an independent institute.

The Partnership Agreement between the Dominica National Conservation Trust Fund and the Caribbean Biodiversity Fund is scheduled to be signed by December 2022.

About the Caribbean Biodiversity Fund

The Caribbean Biodiversity Fund was established in 2012 to create reliable, long-term funding for conservation and sustainable development in the Caribbean region.

The Caribbean Biodiversity Fund (CBF) is a regional umbrella environmental fund that uses a flexible structure to implement innovative solutions and consolidate resource mobilization in the Caribbean through a range of financial instruments.

Currently, the CBF has two programs:

A Nature-based Solutions program will be added to the CBF portfolio by October this year.