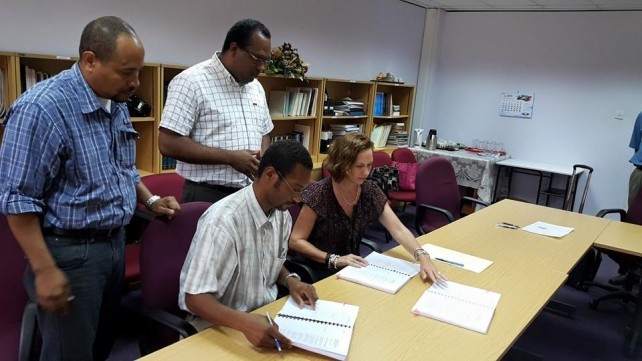 The Government of Dominica and the NSG management and Technical Services Ltd on Friday 5th June 2015, signed, a US$2.1 million contract for the design of the Roseau and Portsmouth Enhancement Project.

In the contract, which was signed at the Ministry of Finance conference room, the following areas will be considered for design.

In Roseau: rehabilitation of all streets, including drainage, sidewalks, landscaping and street lighting, provision of adequate parking and facilities for public transport, rehabilitation of the West Bridge and the concept designs for cruise ship terminal development.

In Portsmouth: a bypass road to the Cabrits.

“Following the completion of designs, the first phase of construction will be as follows: for Roseau-the construction of the new West Bridge, and the rehabilitation of Independence Street are the two first projects to be done,” Minister for Public Works, Ian Pinard, said.

According to him, a condition survey for the West Bridge has shown “severe deterioration” in its structural components and it has to be replaced. “Similarly”, he said, the road network needs attention.

He indicated that the first phase for the Town of Portsmouth will be a bypass road which will be expected to “complement the construction works and the functioning of the hotel project funded by the government of Morocco.”

The duration of the contract is for six months.

Actual construction on the project was expected to begin in the “first quarter of next year,” (2015) consultant at the NSG Management and Technical Services Ltd, Ian Fields revealed back in October 2014 at the signing of the Memorandum of Understanding (MOU) between the two parties.

When quizzed on this, Pinard stated that there were some delays in the project “so that’s why it took a bit longer than expected.”

“Any project or any contract that you have, especially given the new mandate, a new minister, a new Permanent Secretary, negotiations, so there were some delays,” he said.

The Minister stated that as soon as the design is completed, the actual commencement date for the project itself will be determined but Permanent Secretary in the Ministry of Public Works Kendall Johnson said, “We are looking at quite likely start [of] works by this year.”

The overall cost of the entire project is between $70-100 million.

NSG Transportation Consultant, Ian Fields, said part of the delay had to do with some “refinements” that had to be done as well as finalizing what would be the most appropriate “package of measures.”

He said there are about 20 specialist engineers working on various aspects of the project, describing it as “demanding” because it is multi-faceted.