In an effort to raise funds for the Dominican Mountain Chicken Conservation Project, UK-based Luke Harding, who was once a volunteer on the project in 2014, has partaken in the 2016 Virgin Money London Marathon and ran a time of five hours and 34 minutes.

Mr. Harding so far has raised £1,242 which will go towards conserving the frogs species and continued efforts in field research to better understand Chytrid fungus and to continue the monitoring of the surviving population of frogs on the island. 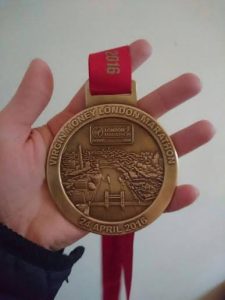 In an interview with Machel Sulton; the Senior Amphibian Officer with the Forestry Wildlife & Parks Division, Harding said, “It was a good run, as he had a year to prepare for the marathon, lots of training and keeping a proper diet. This run was a remarkable day and a huge personal challenge”.

Mr. Harding continued by saying that “The funds raised will go directly towards the project in Dominica and urge persons to continue supporting the project. What is happening in Dominica is a game changer in terms of conservation and also that there are positive signs, that the frogs are coming back, however its needs local support”

The London Marathon is very popular for being the longest run. Record numbers finished the Virgin Money London Marathon with more than 39,000 completed the grueling 26.2-mile journey from Blackheath to Westminster, making the 36th edition of the race the biggest in its history by almost 1,500 runners.

Eliud Kipchoge came first 1st to smash the men’s course record and become the second fastest marathon runner in history While Jemima Sumgong provided the day’s big drama, turning near tragedy into triumph as she rebounded from a heavy fall to seal the fifth Kenyan double in the event’s 36 editions.

In December 2002, the presence of deadly virus Chytridiomycosis decimated the population by some 80 percent. Today, the remaining wild population in Dominica has been estimated to be no more than a few hundred individuals, making the Crapaud one of the most critically endangered species in the world.