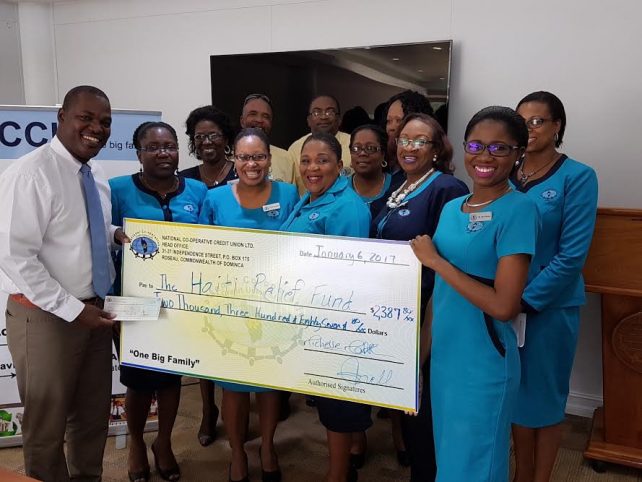 In keeping with these governing principles, the National Co-operative Credit Union Limited (NCCU) donated US$5,000.00 to its Haitian counterparts to assist in that country’s recovery from the devastating effects of Hurricane Matthew on 4 October 2016.

In an effort to boost the contribution from their employer and to demonstrate their concern for their Caricom brothers, the staff of all six Branches of the NCCU collected money from their personal funds to assist Haiti in its time of need.

At a brief ceremony held on 6 January 2017, the NCCU staff members handed over a cheque in the amount of EC$2,387.80 to the newly appointed General Manager of the Dominica Co-operative Societies League, Mr. Phoenix Belfield.

Speaking at the handing over ceremony, Carnival Queen 2017 contestant, Ms. NCCU Jade Romain noted “staff members of the NCCU Ltd wanted to add to the donation from our employer to show the real co-operative spirit that exists amongst Dominicans especially the employees of the NCCU Ltd.
We extend our love, support and best wishes to the Haitian people as they continue to recover from the grapples of Hurricane Matthew.”