High schools around the island joined hands with the CARICOM Youth Ambassadors to observe ‘Orange Day’ on Tuesday to help create awareness of violence against women and girls on the island.

The event started at the Roseau Bay Front with speeches from various persons who all advocated a tough stance against violence.

She encouraged everyone to take a stance against abuse of women and girls and told them to wear orange in solidarity and in support of those victims.

President of Caribbean Male Action Network (CARIMAN) Thomas Holmes supported the call and said all forms of domestic abuse must be rejected. “We must reject all forms of violence including that against all males,” he said. “CARIMAN is in solidarity today to show that we boys and men can come together to end violence. Many of us boys and men do not want to stand up against violence because we are afraid of being rejected.”

He also pointed out that bullying is prevalent in the nations’ schools and should be addressed before it gets out of control. “Teach our young men to respect their sisters, all girls and their mothers. We must not tolerate and condone disrespect,” he said.

President of the Dominica National Council of Women Josephine Dublin-Prince, also addressed the issue of violence against women and suggested that ‘Orange Day’ be put on the national agenda and must be taken seriously.

She encouraged all young women to get educated and empower themselves to stand up against violence. She called on the authorities to put the necessary mechanisms in place to ensure that girls and women are secured.

Carnival Queen 2012 Nadira Lando and Minister for Culture, Youth and Sports Justina Charles also gave solidarity messages at the event. They too encouraged women to stand up for themselves and speak out against violence.

Organizations involved in the initiative are Youth Development Division, National Youth Council, CARIMAN, DNCW, among others.

‘Orange Day’ ended with a march around Roseau. 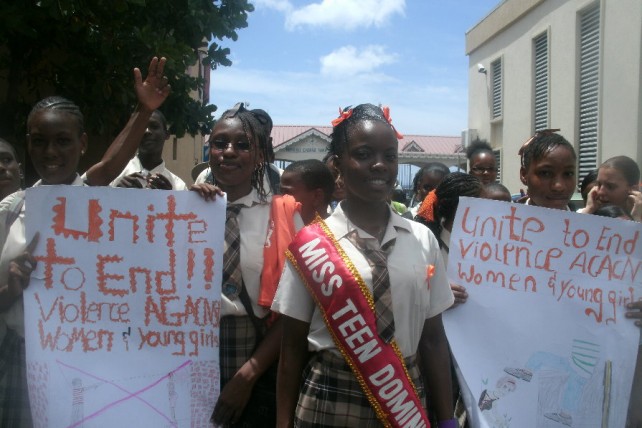