Concerned Dominicans who have taken a stance against abuse, especially child abuse, stole the limelight for two hours with their neon and multi colored posters on the E.C Loblack Bridge on Friday in a silent protest as they made it clear their position on the matter.

“Stop sexual abuse!” “Put a stop to sexual assault!” “No excuse!” “Break the silence!” were some of the messages clearly communicated during the event.

“We are participating in a silent protest to raise awareness of child abuse, domestic violence and a number of other issues particularly child sexual abuse,” General Secretary of the NYC, Delroy Williams, told reporters.

Williams pointed out that in recent times there has been a rise in the numbers of child sexual abuse and domestic violence cases on the island.

“So it’s very important, as a society, we respond to those situations and one of the ways we are responding as a community, as a non-governmental organization, as a respectable Dominicans is to make sure that we protect our children and one of the methods of doing that is to have this silent protest this afternoon,” he said.

He noted that hundreds of Dominicans are making thier way in and out of Roseau and the event will “basically show them that there are people who are concerned about children and children’s welfare.”

When asked whether this kind of activities are hitting their mark Williams responded, “Even if it is one child that is basically being saved, the impact will go throughout the rest of the island.”

He said similar activities are being planned across the island.

“We are hoping to have a petition signed and presented to the prime minister and the relevant authorities in an effort to change laws to ensure that our society is more responsive, is more proactive as we look forward in protecting our children,” Williams said.

He also called for the establishment of a child molester’s registry so Dominican can be “aware of who the criminals are among us are and we can protect our children even better.”

Meantime children’s advocate, Gloria Walsh who was also part of the protest, said she is speaking for those children who were either silenced by their abusers or their parents.

“The reason why I am here is because I have seen, not what people tell me, I have known of cases where children are being abused,” she stated. “And some people just walk away.”

She said abused children are being threatened and they are afraid to speak out.

“So I am there now to add my voice and to those that are silenced especially the children that cannot say anything because of fear,” she said. 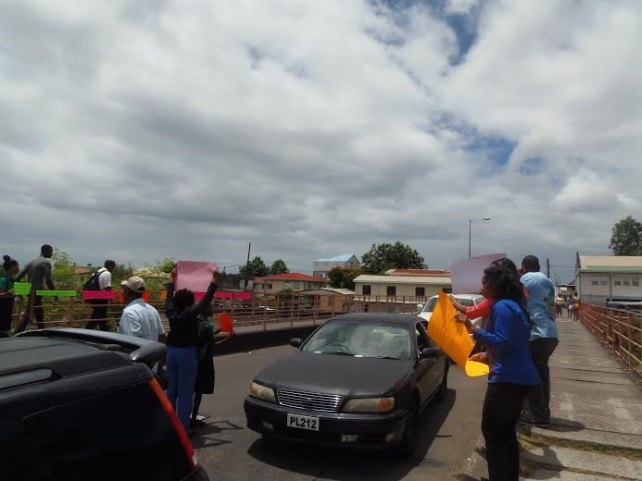