General Secretary of the Dominica Public Service Union (DPSU), Thomas Letang, has vowed that unless matters involving staff of the Public Works Corporation (PWC) have been addressed, protest action will continue.

Protest continued for a second day at the PWC site in Goodwill on Thursday and Letang told the media that a PWC board meeting is scheduled to take place later in the day.

“The protest will continue and we will be meeting with the board at 2:30 pm and from there we will decide,” he said.

He stated that matters such as the payment of salaries will be discussed and then the situation will be reviewed.

“But the protest is not ending, it will continue until all issues are addressed,” Letang declared.

When questioned on his level of optimism on whether the issues will be addressed, Letang responded that he will be better able to address the matter following Thursday’s meeting.

For the second day staff of the Corporation abandoned work and set up a temporary shelter, on the premises of its facility in Goodwill.

The shelter also blocked the entrance to the facility.

Workers told DNO that late salaries and inconsistency with the payments of their Social Security are hindering them from living a comfortable life.

The situation is so grave, some pointed out, that whenever there is a holiday and everyone else is shopping and having a good time with their families, they are forced to go without.

One worker, who chose to remain anonymous, lamented that she had to sell her car because she was “fed-up” of the bank calling her to inform her that payment was overdue.

Another man stated that he is unable to make his family events, such as birthdays, memorable, adding that his wife was unable to have a happy Mother’s Day when all other mothers were having a good time.

“No one cares,” he said sadly.

He promised to keep protesting until all matters are addressed. 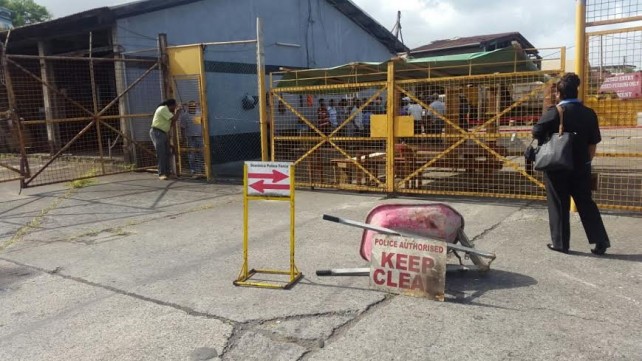