The People’s Republic of China has donated 50 hand foggers, totalling over US$150,000, to the Ministry of Health and Environment to help in the fight against the spread of vector-borne diseases on the island.

“It will enhance the country’s response to mosquito-borne diseases outbreaks and incidents; it will enable the training of individuals so that we can get more assistance in chemical treatment and it will allow the Ministry of Health to establish and maintain treatment cycles to cover the entire island,” she said during the presentation last week. “So the donation is much appreciated and it will go a long way in enhancing our vector control activities.”

Carbon thanked the People’s Republic of China for the gesture.

She noted that Dominica has experienced three outbreaks of mosquito-borne diseases in recent times. “We had Dengue Fever, in 2013/2014 Chikungunya and we are currently responding to the occurrence of Zika Virus,” she said.

China’s Ambassador to Dominica, Li Jiangning said vector-borne diseases is a big threat, not only in Dominica but also the world.

He stated that the machines will be used for island-wide control needs.

Li went on to say that the donation is an example of the continued friendship between Dominica and the People’s Republic of China.

“I am sure that these machines will play its role in vector control in Dominica and that our friendship and cooperation will continue to develop and prosper in the months and years to come,” he noted.

Meantime, Health Minister Dr. Kenneth Darroux assured the ambassador that the hand foggers will be put to good use.

He said his ministry continues to strive to get read of mosquitos.

“The Ministry of Health and the government by extension will continue to do what we have to do to assist,” he stated. “This should not take away personal and civic responsibility of individuals, of families, communities and of course the country as a whole, because if not we will just be playing tug of war. We will do what we have to do to make sure that we maximize the use of these fogging machines, but you the citizenry of Dominica also have to help us in order to help yourself.”

Mosquito-borne diseases are among the leading cause of death in the world today. 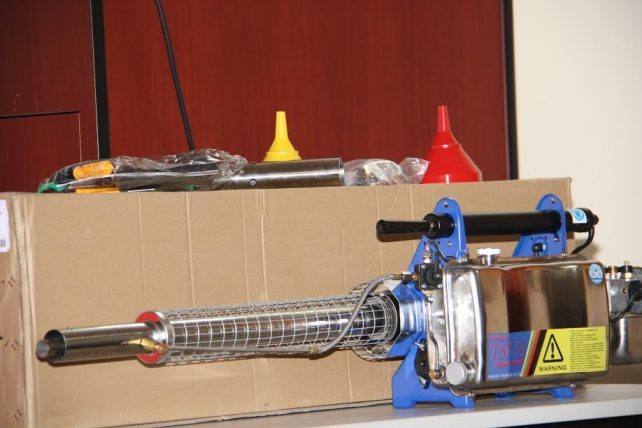