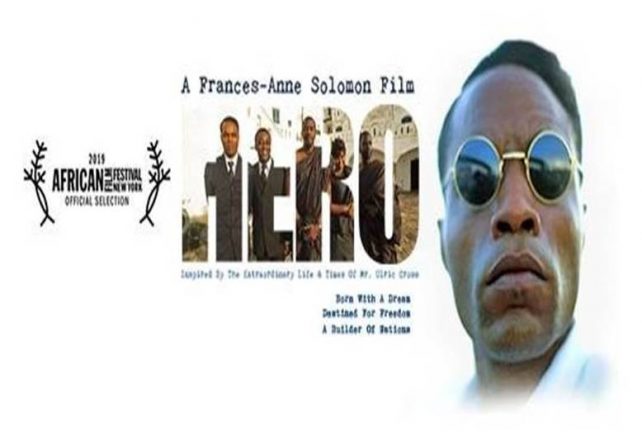 When former World War II Royal Air Force (RAF) Squadron Leader, attorney, judge and diplomat, Ulric Cross died in Port of Spain on October 4, 2013, very few Caribbean nationals knew his name; fewer still knew of his work for the liberation, unity and progress of Africa and the Caribbean. In one spectacular rendition of history via cinema, the director and producer of the Ulric Cross biopic Frances-Anne Solomon fills that huge gap in the popular consciousness.

“Hero” a movie on the life and times of Ulric Cross, opened the 2019 Caribbean Film Festival at the American Film Institute, Silver Spring, Maryland on the evening of June 6, 2019. The festival co-presented by the Caribbean Association of the World Bank and IMF Staff (CAWI), Caribbean Professional Network, Institute of Caribbean Studies (ICS), and Africa World Project. Hero – inspired by life and times of Ulric Cross the highly acclaimed new film was shot in Trinidad, the UK, Ghana, and Canada. Flitting across the screen the rapt audience was treated to a cornucopia of period music, costumes and archival footage skillfully woven into tapestry of Cross’ life as portrayed by the lead actor Nikolai Salcedo of Trinidad. Funded by Republic Bank of Trinidad & Tobago, the film boasts an all-star international and Pan African cast including Jamaican born Peter Williams, the UK’s Joseph Marcel, Fraser James, and Pippa Nixon; Ghanaian superstars John Dumelo and Adjetey Anang.

We are introduced to Pan African icons, such as Kwame Nkrumah, Julius Nyerere, George Padmore, CLR James, Dr. W.E.B Dubois, Eduardo Mondlane, Ras Makonnen, and Samora Machel, all of whom – at one point or the other work or associate with Cross in pursuing African freedom. The movie takes us from Cross’ early days in Trinidad where he attended the prestigious St. Mary’s College after coming first in the island’s secondary school entrance exam. Cross’ mother dies when he is just thirteen and his father abandons his family to seek his fortune in Venezuela. Devastated, Cross drops out of school. He works on the railroad and then does a stint as a newspaper proofreader. Cross constantly nourishes his intellectual bent by forming a book club, focused on left politics. When war came in 1939, Cross was determined to combat fascism and he volunteered to join the Royal Air Force in 1941.

As he related to me in a 2008 interview included in  “For King & Country: The Service and Sacrifice of the British West Indian Military” (Irving W. Andre, Gabriel J. Christian, Pont Casse Press, 2009), “France had been defeated and the British Expeditionary Force had been battered and had to retreat at Dunkirk. All of Europe was drowning in fascism and America was not yet in the fight. I had to do something.”  Cross studied at the RAF college at Cranwell as a navigator. As he related to me, during the early days of the war 80% of the bombs dropped by the RAF missed their target. Cross was among the 7,000 British West Indians who served in the RAF during the war – more men than from any other area of the world. Most of these hidden figures who served flight crew in Britain’s victory in the war, did so as navigators. Coming from elite West Indian schools such as the Dominica Grammar School, Antigua Grammar School, Kingston College Jamaica College, Wolmers (Jamaica), Queens College (Guyana), Harrison College, Lodge School, Combermere (Barbados), Queens Royal College and St. Mary’s College (Trinidad & Tobago), the RAF volunteers were proficient in mathematics, and geography. These navigators worked with slide rules, maps, the compass and other means in the time before computers or GPS. Those human computers of Caribbean origin later rose to leadership in the region and abroad: Errol Barrow became Prime Minister of Barbados,  Dominica’s Dr. Edward Scobie became a well-regarded Professor of African Studies at Princeton, Milton Cato became Premier of St. Vincent, Dudley Thompson became Jamaica’s Rhodes Scholar of 1945 and rose to become his country’s minister of Foreign Affairs. Flying in a Mosquito of 139 (Jamaica) Squadron of RAF Bomber Command, Cross did 80 missions over Germany, to include 20 over the most heavily defended sections of Berlin. He became a Squadron Leader and earned the Distinguished Flying Cross and Distinguished Service Order for valor in aerial combat.

When Cross finished the war, he was the most highly decorated West Indian. He completed his law studies at Middle Temple in quick time but could not find employment in his field. Thereafter he took up a short career at the BBC focused on African and Caribbean issues. The movie reveals that Cross’ link Pan African revolutionaries who organized the 1945 Pan African Congress in Manchester prejudices his chances to climb the ladder at the BBC; his program is abruptly cancelled.

Cross goes to work for Kwame Nkrumah, new President of Ghana and associates with George Padmore’s African Affairs Bureau. Padmore dies shortly thereafter; the biopic inferred that he was poisoned by the usual suspects – puppets of colonialism. The film spotlights that Cross was at the vanguard of Padmore’s move to forge a united states of Africa. Sent as emissary to the Congo by Ghana’s new leader Nkrumah, Cross seeks to aid a floundering Patrice Lumumba, the new leader of Congo. Lumumba is murdered. Cross’ spirit is crushed and he is enveloped by nightmares of his own death. His wife Ann, a progressive white Briton is determined to support Cross through it all.  Cross then becomes Attorney General of Cameroon and brings in several lawyers from the Caribbean to work with him in building the legal system of that new state. Among the recruits from the African Diaspora is attorney Cosie Harris of Dominica. From Cameroon Cross travels to Tanzania under Julius Nyerere where he becomes head of the Industrial Court in that country, while Telford Georges of Dominica serves that nation as Chief Justice.

Cross is shown throughout as battling the forces of tribalism, and colonial brainwashing which favors the rise of puppet leaders such as Mobutu and those who overthrew President Nkrumah. Cross narrowly escapes assassination himself, when a letter bomb sent by Portuguese agents kills Mozambique freedom fighter Eduardo Mondlane, leader of Frelimo. At that time Frelimo is battling Portuguese control of Mozambique. Cross had related to me that a family matter had him arrive at Mondlane’s office late that day, seconds before the bomb detonated.

We salute Frances-Anne Solomon and her cast for taking us on a dazzling tour of Cross’ life. She was exquisite in her blending of interviews by Cross, and his wife Anna with archival audio-visual fragments tastefully chosen to bring convincing color and ambience of the period shown to the most discerning viewership. Cross’s daughter Nicola is well portrayed doing some of the interviews with Cross who is shown on his bed, then well into his nineties.  We are taken from the soaring heights of air combat, to the joys of African independence. We confront the lows born of betrayals, tribalism and treachery as Cross tried to educate, inspire and organize legal systems to advance African nationhood. This enlightening movie will change history. Go see it. Take your friends. Take your family. Tell others.  Seize the time. Make a meaningful contribution to your community and nation.  Ulric Cross did exactly that.  In a time when we need inspirational leaders to better humanity, Ulric Cross was a hero for all seasons.  Let us remember him by following in his valiant and noble path.

You can view the trailer for the film below: