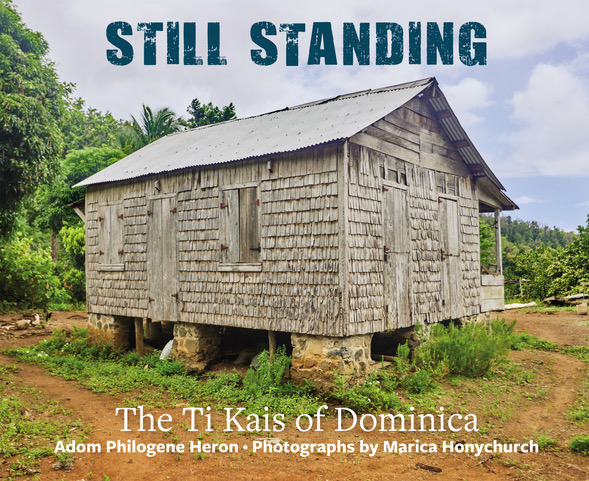 Still Standing, the story of the vanishing vernacular architecture of Dominica, is to be launched in Dominica on Monday (19 December) following its UK publication in October. Written by Adom Philogene Heron with photographs by Marica Honychurch, and a foreword by Lennox Honychurch, Still Standing looks at the history and importance of the ti kai to the heritage of this island. The beautifully illustrated book features interviews with those who live in Dominica’s few remaining ti kai and explores how and why they have survived for so long.

These small wooden houses, ingeniously crafted and carefully adapted to their environment, have survived hurricanes and earthquakes. In contrast to many modern concrete buildings, they are ‘still standing’. Even so, they are under threat.

The author, Adom Philogene Heron, who describes himself as a ‘grandchild of Colihaut’, is a British-born anthropologist at Goldsmith’s University of London.Still Standing represents a strand of his ongoing project,

Surviving Storms, which explores  the past, present and future of Dominica’s relationship with hurricanes: ‘Learning how past communities survived and built houses with the hurricane in mind.’

Still Standing does not wish to paint the ti kai ‘as some quaint relic of an island’s past, but, as both living, ever evolving examples of creole heritage and as a model of “resilient” and sustainable dwelling.’ The stories and images in this book provide powerful evidence for vernacular conservation and, it is hoped, will thus inspire new respect for Dominica’s history and culture.

Adom Philogene Heron’s perceptive and illuminating introduction ends with a call to both respect and reclaim the ti kai: ‘Perhaps we need not look to distant shores or international experts for cutting edge models of “resilience”, when, in fact, the environmentally responsive and hurricane-secure ti kai presents us with a native form of human habitation that is so carefully attuned to its island home.’

Photographer Marica Honychurch was born and raised in Dominica; after moving to the US as a teenager she gained a BFA at the University of Colorado before returning home. She is a well-known freelance photographer and videographer and her work has appeared in international publications. She says that: “Having a little window into the lives of people living in Dominica’s unique structures was intriguing and allowed me to not only capture their pride in their homes but also gave me more insight into the strength of these fascinating buildings.”

The book will be available for sale in Dominica at Zeb Kweyol, Jays, K-Kai boutique, and the Douglas Charles airport. Still Standing is published by Papillote Press, based in Dominica and the UK.

What they say about this book:

‘Beautifully presented and engaging… Ti kais speak so subtly of the notion of home in a tropical climate.’ Jonathan Glancey, former architecture correspondent, The Guardian, UK

‘A must read for anyone interested in the architecture of the Caribbean or more generally the social anthropology of buildings.’ Louis P Nelson, professor of architectural history, University of Virginia

For further information, please contact the publisher, Polly Pattullo, on 295 1563.