“Mac,” as he was affectionately known by all was the brother of the late Michael Douglas and Rosie Douglas who died in office eight months after becoming Prime Minister of Dominica.

He died in England last month at the age of 69. He was laid to rest over the weekend.

A former parish priest of Portsmouth, Fr. Sharplis who is now pursuing studies in Canada said it was clear that “Mac” was raised by elderly people who passed on the Catholic faith to him in such depth that the Latin Mass never left him.

“Mac saw himself as Catholic and defended the faith was his very life,” he stated. “He would be at the snackette and stood there to talk to any person even leaders of other churches to articulate the teachings of the church. Mac’s ability to stand up in defense of his faith came as a result of his readings and research on church doctrines and teachings. He was deeply marked by everything Catholic.”

Fr. Sharplis continued, “Mac felt that the priest was duty bound to offer him mass daily despite other commitments or other missions here and overseas. Mac attended mass daily. Since we had no parish church, masses were held at the parish hall. As a result, he asked for a key, which I gave him, so he would stay in church especially when the Blessed Sacrament was exposed for adoration. He stayed two to three hours reading his thick Latin book. He always carried that Latin book and now he is gone who will carry on his mission.”

He said Douglas’ mindset was such that he could find himself at odds with priests and challenged them but it never shook his faith.

“Mac did not define his faith by how the priest lives or was. He was Catholic and remained faithful to that,” Fr. Sharplis stated.

Fr. Tarimo was the main celebrant at the funeral mass assisted by Monsignors Thomas and Jno-Lewis and Fr. Sebastian.

President of Dominica Charles Savarin along with Prime Minister Skerrit and members of his Cabinet attended the funeral mass.

Douglas was laid to rest at his family plot in Hempstead. 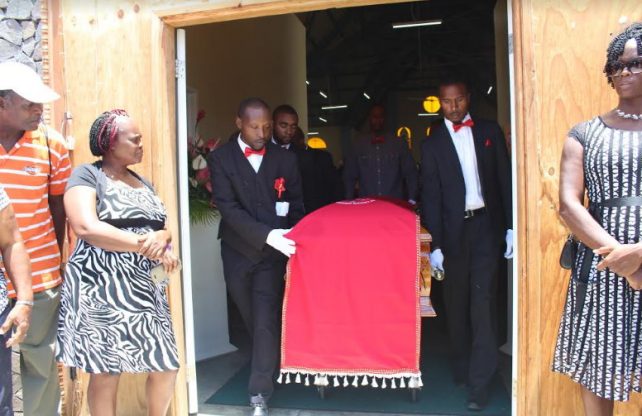