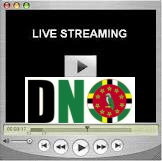 Dominica News Online will be streaming live the state funeral of the late former President of Dominica, His Excellency Dr. Nicholas Liverpool.

The funeral is expected to begin at 3:00 pm at the Grand Bay Roman Catholic Church.

Dr. Liverpool will be laid to rest at the Grand Bay Roman Catholic Cemetery.

Dr. Liverpool served as the sixth President of the Commonwealth of Dominica.

He passed away in Miami on June 1.