The police have charged three more members of the United Workers Party (UWP) with “obstruction” dating back to the February 7, 2017 public meeting organized by opposition parties to demand the resignation of Prime Minister Roosevelt Skerrit.

Opposition Leader and leader of the UWP, Lennox Linton,  Roseau South MP Joshua Francis and UWP PRO, former superintendent of police, Nicholas George, all revealed to the media on Friday August 4, 2017, that they had been served with summonses to appear in court for “willfully obstructing police in the execution of their duty.”

These charges represent the latest police action in response to acts of violence and vandalism which took place in Roseau after the public meeting on the night of February 7, 2017. following a public meeting organized by opposition parties calling for the resignation of Prime Minister, Roosevelt Skerrit.

Francis, the police say, obstructed them from having a truck move west, away from the Financial Centre after the meeting.

The matter was filed 3 days short of the six months limitation according to law.

Former UWP political leader Claudius Sanford was arrested several days after the incident, held for 10 hours and charged with suspicion of obstruction. Two other prominent members of the UWP, Joseph Isaac and Dr. Thompson Fontaine as well as General Secretary of the Dominica Freedom Party, Johnson Boston, were also taken into police custody. However, they have not been charged.

The United Workers Party (UWP) has characterized the arrests as the ‘political persecution’ of its political leaders while Boston has accused the government of using the police action to suppress democracy.

The Joshua Francis matter is set for September 25, 2017

Below is the summons sent to Francis. 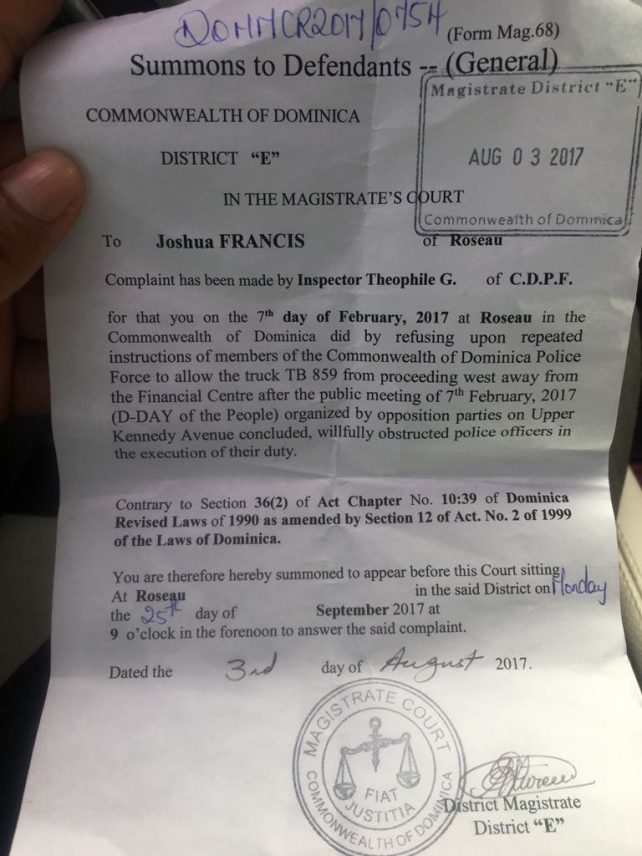