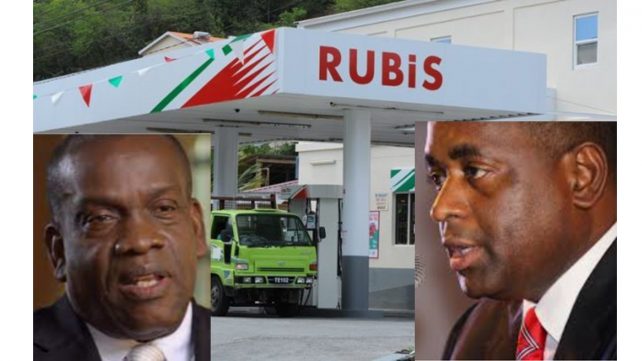 Amidst negotiations between the government of Dominica and Rubis West Indies Limited, leader of the opposition United Workers Party (UWP), Lennox Linton, is calling on the administration to reduce the tax burden on the petroleum industry on the island from $3.25 to $2.65 per gallon.

Earlier this month, Dominica News Online (DNO) received and published a copy of a letter sent to members of staff of Rubis, informing them of the company’s decision to temporarily withdraw its services, pointing to a loss of earnings for nearly five years.

Effective September 16, 2021, employees will be laid off for three months as Rubis, which has a network of nine service stations in Dominica, suspend their sale of fuel and await word from the Government which could affect the company’s future on the island.

While speaking on the status of the negotiation on August  27, Prime Minister Rosevelt Skerrit announced that his government will import petroleum if Rubis leaves Dominica, and made it clear that he will not give in to ‘extortionist approaches’ which he alleges the company has taken.

He argued against the $1.76 more per gallon on the price of petrol which he said Rubis is requesting by pointing out that given the price build-up mechanism that determines the wholesale price and the final price at the pump, his government is not paying the company less than what they pay for the gasolene, as they allege in their letter.

The prime minister disclosed that “out of good faith” the government has offered an increase in the in-transit fee as well and an additional offer of 0.23 cents while awaiting the audited statement from the company.

However, according to Linton, the Prime Minister’s response to the company’s struggle to survive “in an increasingly difficult regulated Dominica market”, suggests a looming crisis that all citizens should be wary of.

He said the petroleum products industry in Dominica which involves the importation, storage, distribution and retail of petroleum-based products such as gasoline, diesel, and Liquefied Petroleum Gas (LPG)  is 100% regulated by the government, as it should, due to the critical public interest in ensuring affordable and reliable petroleum products to Dominican businesses and consumers and supporting growth across all sectors of the economy.

“The purpose of the regulation, therefore, is not to bleed the industry for tax revenues at the expense of profitable private sector operations. But to justly and fairly deal with the public interest in stable, reliable supplies of petroleum products at the most economic prices to consumers,” the UWP leader pointed out.

Linton further reported that as it stands presently, the Cost Insurance and Freight (CIF) in Dominica is  $8.11, while the customs service charge on that CIF value is 25 cents, and the excise tax is $3, to arrive at a landed cost of $11.36.

He said an additional 27 cents are added in the price build-up for storage and distribution as well as a distribution margin at 67 cents which brings the wholesale price to  $12.30, plus an added retail margin of 70 cents to come to the retail price of $13 which consumers are now paying at the pumps .

From this amount, $3.25 in taxes goes to the government, however, the distribution margin is 67 cents and the retail margin is 70 cents, Linton informed the poublic.

“The challenge is that both the wholesalers and retailers, with justification, claim they are unable to survive on the margins given to them by the government of Dominica,” the Opposition Leader stated . “This is because Dominica has the lowest volumes in the Eastern Caribbean and these volumes have been significantly depressed further since COVID-19 with the loss of the tourism industry and the restrictions on movements due to COVID protocols.”

He added that the costs for the industry players have not changed and in fact, have in some cases, have been increased pointing to what he said was the drastic cost of power, the pending increase in the minimum wages, and security “costs.

He cited the only beneficiaries of fuel sales on the island as the government of Dominica.

“Yet, the Prime Minister is quite happy to regulate the private operators out of the market by refusing to allow them to make a fair return,” Linton said. “He has also announced that if the fuel suppliers are not prepared to do as he dictates, then the Treasury will purchase fuel for distribution. That means he’s about to nationalize the petroleum industry.”

The opposition leader went on to call for a fair and just margin from the petroleum price to the private operators and proposed a reduction in the tax burden on the industry from $3.25 to $2.65 per gallon.

He further recommended that the government split the yield of 60 cents evenly between the petroleum importers and retailers to move the distribution margin from 67 cents to 97 cents per gallon and the retail margin from 70 cents to $1 per gallon.

“For a government that plans to increase its overall recurrent revenue by 29% this year, giving up 18% of its petroleum tax revenue derived from myopic regulatory practice to ensure that petroleum products importers and retailers are able to continue their tax-generating operations is a no brainer,” Linton said.

He stressed that these operators should not be forced to close operations under the pressure of mounting losses, just so that “some hero” can emerge shortly thereafter claiming credit for solving a problem which Linton believes should have been done a long time ago.

Speaking to DNO Country Manager for Rubis Gas Station Nicholson Dodds, highlighted that though the company which he leads locally is the only one at the forefront “taking the heat” they are not the only company in the industry who is seeking a price regulation.

He declined further comments and noted that the company has taken a position that since they are still in negotiations with the government and hoping for a resolution at this point they will not refrain from making any further public statements.