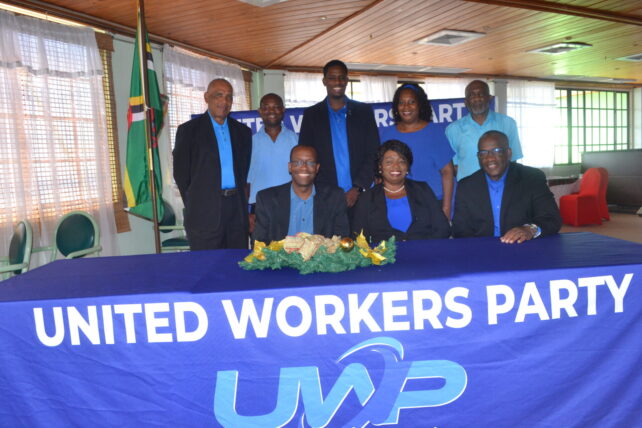 The newly elected United Workers Party (UWP) executive and the Electoral Reform Coalition (ERC) will organize a number of protest actions in the coming days to further voice their opposition to the impending elections that will take place without the long-awaited electoral reform.

The UWP’s political leader, Dr. Thomson Fonatine, stated at a press conference on November 29, 2022, that the party continues to stand steadfast in the belief that the reform process, which has already begun, must be finished before another round of general elections in Dominica.

According to Dr. Fontaine, the sole commissioner appointed to review and advance reform, Sir Denis Byron, has completed his initial work and will therefore provide the opposition and the government of Dominica with a copy of his draft legislation.

In light of this, he emphasized that his party is taking every action within the bounds of the law and the Dominican Constitution to ensure that electoral reforms are completed and provided to the populace, including joining forces with the ERC, which is made up of opposition parties, civil society organizations, and the Public Service Union.

“As part of this effort for electoral reforms, we will be engaged in a number of activities to strengthen our demand for such reforms,” he indicated.

Their action started last evening at 6 p.m. at the Public Service Union (PSU) with a town hall meeting. This will be followed by a drive-through of the west coast on Saturday, a call for national prayer across Dominica on Sunday, and a “major rally” and candlelight vigil in Lagoon Roseau on Monday, December 5, 2022.

Beyond December 6, the party is ready to carry on the campaign for reform, according to Dr. Fontaine.

The economist reiterated his party’s decision, along with two other political parties, to not participate in the upcoming “sham election”, scheduled for December 6, noting that they would only be competing on an unlevel playing field.

“We have seen the means by which this government has continued to win those elections and we continue to maintain that the elections have been stolen. It has been done through a process of trickery, having people vote under a dead person’s name and other situations of persons brought into Dominica. So nothing was going to change in this election,” he explained.

Dr. Fontaine is of the opinion that by adopting this posture, the situation in Dominica will be brought to the attention of regional and global players.

The leader of the 34-year-old party has urged the Organization of American States and Commonwealth Secretariat election observers to take careful note of the challenging circumstances surrounding these hastily held elections.

The party has once more requested that the president of Dominica use his executive authority granted by Article 58 of the country’s constitution to suspend his election writ and postpone the holding of elections until the electoral reform process is finished.

Additionally, Dr. Fontaine urged regional governments and the international community to reject the holding of the election and to refuse to recognize any government that results from it.

Although he avoided giving specifics, the UWP leader indicated that the new executive met with Sir Byron on Monday night to discuss the draft legislation that will be delivered to the opposition parties and the government by the end of the month.

President of the UWP, Lennox Linton, pointed out that the Prime Minister knew that Sir Byron planned to wrap up his consultation on the report by the end of the month and only called the snap election to avoid going into an election with electoral reform.

He said, taking that into consideration, the best course of action is to “keep the focus on the sham elections, and ensure that the rest of the world understands that this is an illegitimate government.”

Linton is adamant that the Prime Minister committed “fraudulent misrepresentation” by calling this election, which is not constitutionally due until May 2025, and forcing the electoral commission to conduct an election for which it is unprepared.

The party has also invited its supporters to another rally on Sunday, December 11, at 3 p.m. to hear about its plans, some of which include new ways to promote the welfare of residents and supporters, active engagement with the diaspora, and the revival of the local economy.