Participant in the recently-held International Visitor Leadership Program (IVLP), Loftus Durand, has described the program as a successful one and plans to implement what he learnt in terms of promoting the idea of volunteerism in Dominica.

The International Visitor Leadership Program (IVLP) is the Department of State’s premier professional exchange program. The program brings together emerging leaders to engage with U.S. subject-matter experts and to share best practices with their global contemporaries.

The IVLP began in Washington DC and ran from January 13 to 31, 2020. It addressed several areas including the impact of volunteerism in U.S. communities and how volunteers are inspired to foster a culture of service, civic involvement, and responsibility.

The 23-member group received an overview of the ecosystem for volunteerism in the United States. They also explored the federal government’s role in promoting volunteerism and civic action.

“The training program was a successful one for me in that I learned a lot and for sure, I will be trying my best to implement some of what I learnt in terms of pushing the idea of volunteerism, each one help one, or we helping each in the country,” he told Dominica News Online (DNO) in an interview on Monday. “Getting persons to volunteer for a worthy cause, just to make Dominica a better place.”

Durand, who is the former President of the Concerned Citizens Movement (CCM) said also, that it was a very good experience for all the participants to be engaged in that kind of hands-on experience.

“We did a lot of work with volunteers and voluntary organizations. They told us how they got started, their challenges, their weaknesses, the things they go through on a day-to-day basis,” he stated.

The second part of the program, Durand explained, was the civic action part which asserted that every citizen of every country is important and whatever citizens do in terms of civic activity, should be welcomed by the country.

“There are certain persons in Dominica, for example, that don’t know their rights as it pertains to their civic actions, so that and more I learnt over there in terms of trying to get persons, especially the younger persons in Dominica, to exercise some of their rights,” Durand indicated. “That for sure; once that is done, they will know that they will reap the benefits…,”

He further revealed that participants were encouraged to start an Alumni Association when they return to their country.

He said there are a number of Dominicans who have already been part of the program, so it’s up to him to get the information, “through the US Embassy to dialogue with them”.

Other participants who were recognized as Caribbean emerging leaders in civil society and for their work in the field of volunteerism were Ekiema Yarde of St Lucia, and P’Della’P Stanley of St. Kitts and Nevis. 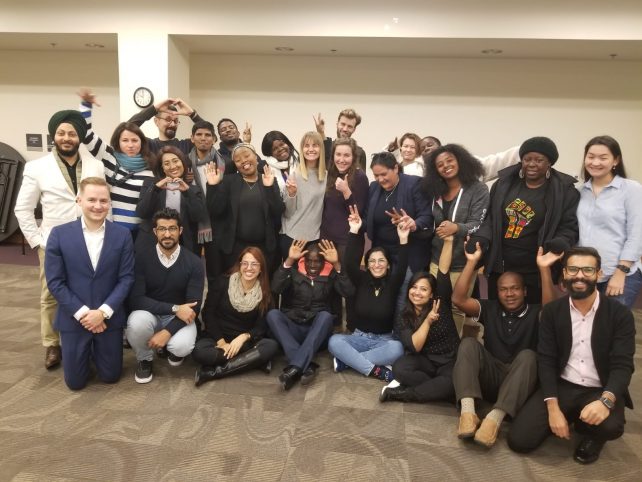