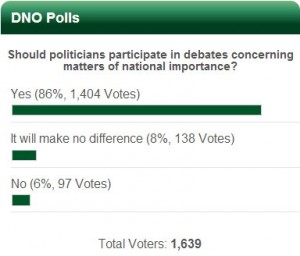 An online poll by DNO has revealed that a majority of readers who participated believe politicians should debate matters of national importance.

“We are issuing the challenge,” the UWP leader stated. “It is necessary for us to debate. We cannot be the last country in the world where no debate takes place, no debates take place among politicians from either side of the parliament. It is totally disgraceful. It is unacceptable.”

The government has remained largely silent on the latest challenge.

In light of this, DNO sought to get the views of readers with a poll.

The poll asked, “Should politicians participate in debates concerning matters of national importance?”

A total of 1,639 readers cast their votes in the poll.

138 readers or eight percent voted, ‘It won’t make a difference.’

DNO’s poll is NOT a scientific poll.