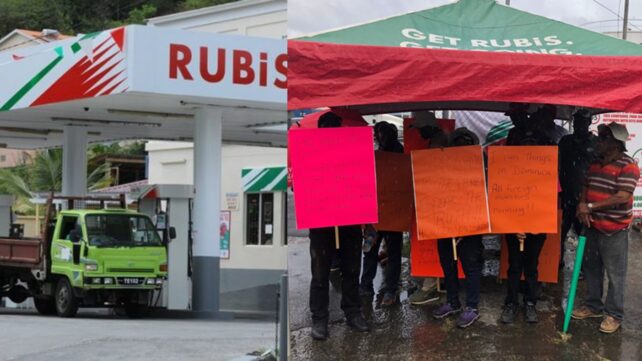 Come September 30, 2022, should the concerns of RUBIS West Indies Limited, Dominica (RUBIS Dominica) and other petroleum distributors not be addressed by the government of Dominica, the 11year-old company will cease operations on island.

This is according to Country Manager of RUBIS Dominica, Nicholson Dodds who told Dominica News Online (DNO), that ten direct employees of the company have been given their severance letters effective September 30.

“All employees have all been served with their potential severance notice. So at this point what they are doing is asking the government to come to the table to see what can be done to save the petroleum industry in the form of peaceful protest actions.”

Dodds stated, while the company has ten direct employees, several other contractors and employees at the service stations will be affected should RUBIS permanently shut its doors in Dominica.

Last week, employees of RUBIS Dominica gathered along the E.O. Leblanc Highway in front of the company’s main compound in Canefield pleading with the government for their intervention in saving their jobs.

“This is a protest for survival,” employee Heskeith Delsol declared. “By the end of September if the government and Rubis are unable to reach a solution, we will be without a job.  Most of us here have mortgages and if September 30th comes and the government doesn’t do anything then we will be in big trouble.”

“I am traumatized,” said another. “By the end of September if RUBIS leaves, we will be out of a job and I don’t know how I’m going to feed my family and pay my bills.”

“If the authorities don’t do anything to save the company come month end I will not have a job. We are asking the government to think of the people who will be affected. We have families to feed so please do something to save our jobs.”

On September 15, 2022, RUBIS Dominica, the distribution company of petroleum and aviation fuels, LPG and lubricants, announced the suspension of fuel sales to its customers, following what the company says is significant financial losses incurred since entering Dominica in 2011 and which they have accrued at an even greater pace for the past six years.

“These losses are due to highly unfavorable mandated fuel prices, which are below the true importation value of fuel.”

A similar action had been announced by RUBIS Dominica in 2021, however, according to the company,  at that time, the Government of Dominica agreed to implement some changes to the regulated prices aimed at partially restoring the profitability of the fuel distribution business in this market, with further actions promised for the first quarter of 2022.

Dodds told DNO, since then, no action has been taken by the to restore the profitability of the fuel distribution business and RUBIS Dominica has continued to incur significant losses as a result as the petroleum products are heavily subsidized by RUBIS and other fuel importers.

He noted that while RUBIS Dominica has been the only importer to take action, “we are not the only ones hurting.”

“All representation that was made to the government was a joint approach between RUBIS, the National Petroleum (NP) and West Indies Oil as we are the major importers and we are all hurting likewise. This is not only a Rubis problem, all players are affected by the pricing structure.”

In a statement by Prime Minister, Roosevelt Skerrit following the announcement of suspension of services by RUBIS Dominica, he accused the company of not being transparent during negotiations.

“We are open to discussions, the discussions must be transparent and information [that] we would ask of RUBIS they must make it available, they should make it available so that the government can have a better appreciation of its concerns and what realistically can be done to respond to the issue.”

However, Dodds debunked Skerrit’s claims as according to him, they want nothing more than to have their issues resolved.

As it relates to continuity of the company in Dominica should their demands not be met by the government, the Country Manager posited, “RUBIS is a company that seeks opportunities for investment and it is regrettable  that our investment in Dominica had to come to this.” Adding, “If the environment sometime in the future is feasible and the investment climate is susceptible to investors I think not only RUBIS  but other companies will be willing to invest but we can’t continue to invest in a market where our returns for several years have been negative and there is no end in sight.”

The Prime Minister has also said that he will write to the French authorities about the action of the Rubis Dominica. Rubis is an independent French company in the energy sector and the production of renewable electricity. It operates in over 40 countries in  Europe, Africa and the Caribbean.

DNO was unsuccessful in our attempts to speak to management of West Indies Oil and NP.