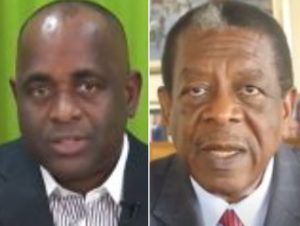 Prime Minister Roosevelt Skerrit has said that eminent Caribbean Jurist, Sir Dennis Byron is in the final stages of putting together his report on Electoral Reform for Dominica.

Sir Dennis  was selected by the Prime Minister to serve as a sole commissioner to advance efforts towards electoral reform.

Concerns have been raised about what some consider to be the tardiness of Sir Dennis’ report after it was postponed multiple times.

Treasurer of  the National Joint Action Movement (NJAM), Anthony E. Leblanc, is of the view that it is taking Sir Dennis “far too long” to present his report and suggested that the eminent Caribbean jurist  may have an ulterior motive.

Sir Dennis admitted in December 2021, that the process had been taking longer than he had anticipated and would not be ready by the end of the year as previously promised. Instead, he gave a new target date of January 2022.

“My understanding is that Sir Dennis is in the final stages of putting together his report,” Skerrit said on his Annou Pale talk show.  “I understand that when I inquire from the commission that he is in consultation with the legal drafts people on the proposed legislation and as far as we are concerned, in the government, we would like to get this electoral reform process behind us and focus on other equally important aspect of the economic and social advancement of the country.”

Skerrit says he believes that based on the attitude of the UWP during the last general elections that is the only vexing issue they had and he hopes that once this is set aside there will be no other issues.

Meantime, the Prime Minister indicated that it is important that those who have been calling for Electoral Reform are prepared to accept the recommendations, “because sometimes people say they want something when really in truth and in fact they do not want it,  so we are ready to move.”