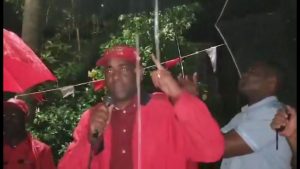 Parliamentary Representative for the Vieille Case constituency, Prime Minister Roosevelt Skerrit, has sent a warning to his political opponents that he is prepared to stand up against them and “deal with all of them.”

Skerrit told his supporters at a thankyou meeting in the Vieille Case constituency over the weekend, “So, they can’t test me; I ain’t fraid dem. You know I will stand up against them and I can deal with all of them…because I know, I have the army, my supporters, behind me from this constituency in particular.”

The United Workers Party (UWP) and its supporters have refused to recognize the results of the December 6 general election and have claimed the election was stolen.

The prime minister gave his commitment to work with his constituents to improve the quality of life in the Vieille case constituency. However, he chastised those who voted for Clement Marcellin, the UWP opponent, suggesting that those who chose not to vote for him should have stayed home instead of voting for the UWP.

He described as “unfortunate” and “a personal issue” those, who he said, were motivated to vote him out.

“I cannot understand [that] anybody in this constituency would go and put, take their own hand, take a pencil and put an X by the SAW against Roosevelt Skerrit, somebody who you know has transformed this constituency,” Skerrit said. “See how we have improved this place. Yes, there is work to be done, but nobody can contest the fact that we have worked and delivered for this constituency, that if you couldn’t vote for me you should have stayed at your damn home and don’t go and vote.”

The prime minister further reminded his constituency that he cannot be fooled and nobody can play games with him.

He touted the December 6 victory for the Dominica Labour Party as historical pointing out that the DLP is the first political party in the whole Caribbean to win a 5th consecutive term in government.