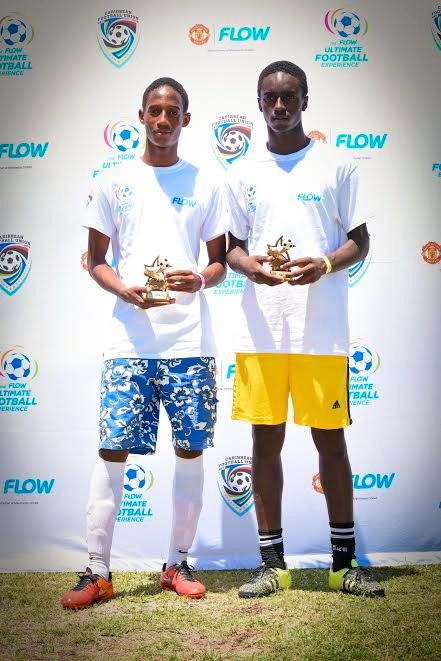 Roseau, Dominica May 5th, 2017: The two talented young footballers selected to participate in the finals of the Flow Ultimate Football Experience will leave island today for a chance to win the ultimate prize.

Jomiah Timothy of the Dominica Grammar School and Cobin Paul of the Portsmouth Secondary School will travel to Trinidad later today to participate in the weekend camp and finals event in Port of Spain. The weekend’s program will include one-on-one training with Caribbean Football Union (CFU) and Manchester United Soccer School Coaches. The players will also compete with the finalists from the other 14 countries for the chance to be one of two players to win a once-in-a-lifetime VIP trip to Old Trafford in Manchester, England to see Man Utd vs Crystal Palace on May 21st 2017.

Jomiah and Cobin outshined twenty-eight other players within the 13 – 16 age range during the Ultimate Football Experience preliminaries held at the Windsor Park Sports Stadium in Dominica on April 8th, 2017. The event featured three main skills including short passing, control, and dribbling.
The skills were all taken from the Manchester United Soccer Schools’ programme and local coaches evaluated and ranked each player. The two winners were selected based on their rankings and assessments in each skill.

Both players are excited about the journey ahead, and Flow’s General Manager Jeffrey Baptiste has encouraging words for them. “Go to Trinidad and give this opportunity your best shot and play the best football you’ve ever played in your life. The goal is to win the ultimate prize to go to Old Trafford, but at the same time it is important to have fun and enjoy yourselves”.

Coaches Joel Hamilton and Glenson Prince along with parents Julius Timothy and Marcellus Paul will accompany the young footballers to Trinidad as they participate in this life changing football experience.

The Ultimate Football Experience is a skills-based competition organised through a partnership between Flow and Manchester United.