As the Pan American Games draw to a close, it becomes a time of reflection for many, including American track and field legends Carl Lewis and Leroy Burrell who were guests at the 2019 Games and had coached several athletes who participated in the Games.

Lewis, whose career spanned close to two decades, told the media he believes competitions such as the Pan American Games will help to broaden the pool of athletes who compete in athletics.

He noted, although the United States of America has always been viewed as the dominant country in sports, it is rewarding to see athletes from all over the world compete at such a high level and succeed.

“Ninety-five percent of the world is outside the United States and with internet, television, social media, access people are getting better. I always believed that I was the fastest man in the world until someone out there was saying ‘I wish I could be like him’ but did not have the same access. So I think that it is so much better in sport…I’m in Peru because of sports and without question it’s going to have a resounding impact on young athletes that watch people on TV…We should not expect to always be the best in the world in the events that we’re in,” Lewis said.

Lewis won nine Olympic gold medals, one Olympic silver medal, two gold and one bronze at the Pan American Games and 10 World Championships medals, including eight gold. He is now a coach at the University of Houston.

He added, “The best thing I want to tell athletes is not to get caught up in all the outside fluff. We’re in a sport that’s declining in a lot of ways, globally. And I always say we were amateurs fighting to be professionals but now we have professionals acting like amateurs. And so we had something to fight for and that was the driving force.” 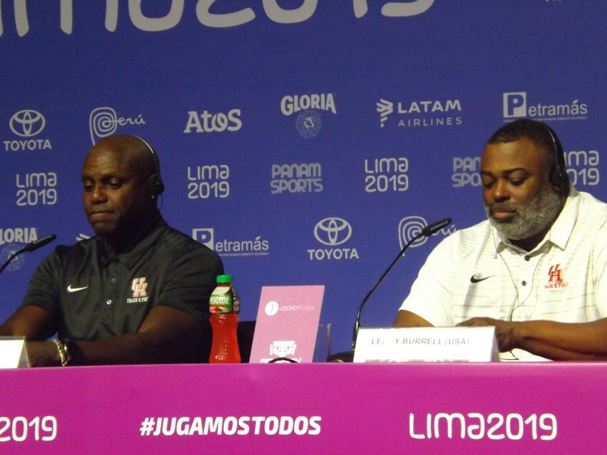 Meantime Lewis’ teammate and staunchest rival, Leroy Burrell, said the value of the Pan American Games should not be overlooked.

“When you think about world sport and Olympic sport, sometimes with the World Championships being held in the same year, you lose sight that there is this event that North and South Americans are very excited about, the Pan Am Games. So we have to really explain that to some of our athletes who just don’t know the history of the Pan American Olympic-caliber athletics. And so when they arrived here they were like ‘Oh my goodness this is big’…Immediately the stature and the opportunity became even more relevant to them,” Burrell commented.

The closing ceremony for the 2019 Pan American Games will be held this evening.