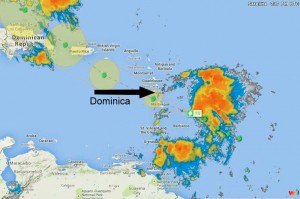 At 5.oo pm today the center of Tropical Storm Bertha passed near the northern end of Martinique and a Tropical Storm WARNING remains in effect for Dominica.

At 5pm, the center of the storm was located near latitude 14.9 north, longitude 61.2 west or about 40 miles to the south of Dominica.

The 5.00 pm update reports Bertha as moving towards the west northwest near 24mph and this general motion is expected to continue for the next couple of day.

On this track, the center of the storm was expected to move away from the Central Lesser Antilles during the next several hours.

Maximum sustained winds are near 50mph with higher gust and TS force winds extend outward up to 115 mile mainly to the NE of the center.

Residents in areas prone to flooding landslide and falling rock are advised to exercise extreme caution.

Moderate to rough sea conditions are expected during the next 24 hours with swells peaking near 10 feet. A small craft warning remains in effect for above normal sea swells.