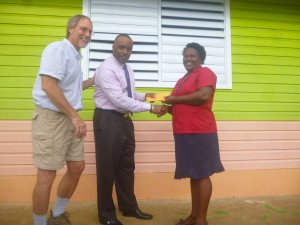 It was an exciting occasion for the staff and students of the Warner Primary school when they recently received 5 laptops and other school supplies  from the  The University of New England ,U.S.A. The donation came as a result of a long exchange relationship between Professor Dr Klak and Mrs Verna De Jean Frederick ,the principal of that institution .Two of the computers were full donations whereas the other three were bought in collaboration. The University students would raise funds and the Warner Primary was to match these funds to purchase the other three laptops. the funds were made available to the Warner Primary  school by the parliamentary representative in collaboration with Digicel Dominica. The presentation was held at the Warner Primary School in the presence of the Teachers and students of the Warner Primary , delegates (students) from the university of New England and Parliamentary Representative Honourable Rayburn Blackmore. The students of the Warner Primary were enthusiastic about the gift and expressed this in singing as they thanked the students and professor. Dr Klak also expressed his appreciation for being made welcome in Dominica and encourage teachers and students to make use of the computers ,they are in working order he said, all the necessary software  were installed at the university, he said. The students in my group worked extremely hard at raising the required funds needed to acquire the donations. Mr Blackmore expressed gratitude on behalf of himself ,the government of Dominica on this initiative and also encouraged the teachers and students to make maximum use of the laptops and also to take care of them.