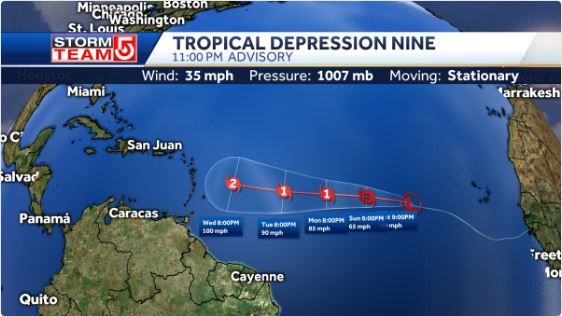 Tropical Depression number 9 which is projected to approach the Lesser Antilles by the middle of next week, continues to show signs of development and is expected to become a storm later today.

That’s according to the 6:00 am advisory released on Saturday 8th September by the Dominica Meteorological Service.

Residents are advised to continue to closely monitor the progress of this system.

Another system, Tropical Depression number 8, developed into Tropical Storm Helene in the far Eastern Atlantic but is not expected to pose a threat to Dominica, Met officials say.

The advisory states that Tropical Storm Florence, which is located over the Central Tropical Atlantic, also poses no direct threat to Dominica.

According to the weather outlook, a surface trough is expected to maintain some weak instability across the area during the next 24 hours. Some cloudiness and scattered showers are expected across the island mainly during the morning.

Slight to moderate seas are expected during the next 24 hours with waves peaking near 5.0ft.