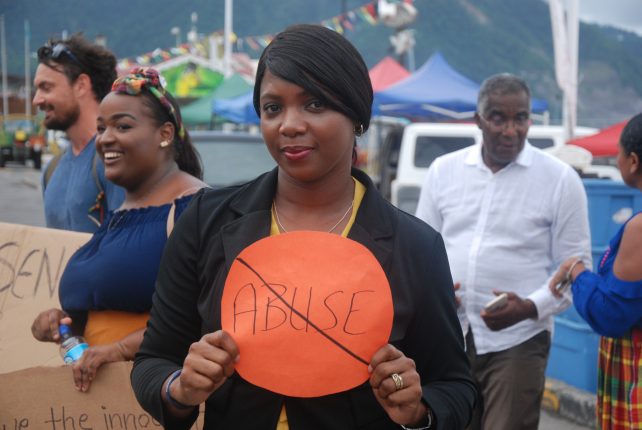 Their tactic was silence, but their message resounded: protection and rights of children, as well as violence against women.

The Business and Professional Women (BPW) Dominica, joined its sister chapter in Grand Cayman and others across the region on their 19th annual Silent Witness March on October 18, 2019, from the Arawak House of Culture to the Roseau Bayfront.

In 2000, BPW Cayman established the Silent Witness March as a small tribute to those who have lost their lives due to, or have been impacted by, domestic violence.

This year’s theme, ‘Remember My Story, Remember My Name,’ encouraged a move away from the stigma often associated with the topic, towards open and honest discussions about domestic violence and its victims.

Succeeding the match, President of BPW Dominica Rhoda St. John told the ceremony, too often the voices of the abused women and children go unheard and justice unserved. She urged the general public to take heed of domestic abuse as it is “everybody’s business.”

“Let us ever be mindful of the need to educate and remind ourselves and others that it is our duty to do whatever is necessary to ensure that this problem is eliminated. The time is now to stand up and speak out against abuse of all forms, rape, mental, emotional, and physical, on our children and women.” 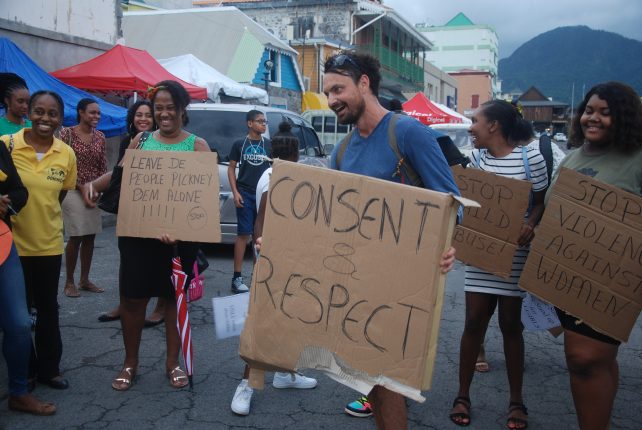 Acknowledging that not all abuse caused to women are from men, the BPW Dominica President stated that the organization also stands for the protection of women against all assaults perpetrated.

“It’s time to stand up and speak out, many women are being verbally abused by others including other women and nothing is done. The law needs to change and protect our women; no one should be allowed to slander, harass, dirty, low-rate a woman and just think it fine to do so. We call on the Magistrates, Lawyers, Prosecutors, Police Officers to take these matters seriously.”

State Attorney attached to the office of the Director of Public Prosecution (DPP), Sherma Dalrymple, dubbed sexual abuse and abuse against children here in Dominica as a disease.

“Dominica is plague with this and it is time we step up and take up the mantle to do what we have to do to get rid of this disease.”

According to the Prosecutor, from the case files received at the Court, no child or woman is immune to abuse hence she appealed to parents to better sensitize their children.

“Parents you need to listen to your children. Also as parents we need to avoid being distracted and when our children come to speak to us we need to engage them and try our best to find out about their day and what’s going on in school because you will be surprise what you can learn from such small interact.”

She lauded the organization for such an initiative and encouraged them, though faced with hurdles to continue the fight for justice.

Meantime, Attorney-at-Law Singola Bloomquist-Williams who also addressed the function, said that the subject of domestic violence and child abuse are never pleasant to discuss; however, such discussions are need as these issues are still prevalent in Dominica.

She alluded to the fact that Dominica has the highest rate of abuse cases in the entire Organization of the Eastern Caribbean States (OECS), a position which we should be ashamed of.

“Violence against women and children is one of the most pervasive violations of Human Rights in the world, and one of the least prosecuted and one of the greatest threats to lasting peace and development. We have made strides in our quest to combat domestic violence in Dominica and there is legislation in place which makes justice more accessible and affordable namely the protection against domestic violence act of 2001.”

One in 4 women will experience domestic violence in their lifetime. Historically under-reported, domestic violence victims have often suffered in silence, something which in many cases has resulted to consequences.

BPW Dominica has pleaded its continued support to the victims as they continue to raise aware of child abuse and domestic violence particularly against women.

A 7-Member Executive was also elected to run the YBPW who are subsidiaries to BPW Dominica Chapter, which caters for members 35 years and under.

BPW Dominica Chapter is an affiliate of BPW International which was founded by Dr. Lena Madesin Phillips in 1930. BPW International is one of the most influential international networks of business and professional women with affiliates in over 100 countries in five continents.