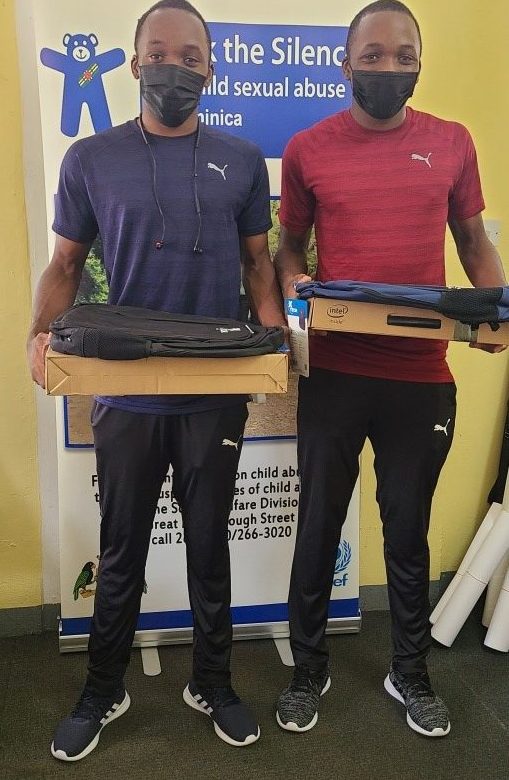 Peter and Peterson expressed their gratitude for the support and stated “We are happy to have obtained this athletic opportunity, and we are also grateful for the support that we have received from various organizations which assisted in our travel to Jamaica”. “We are very happy because we are seeing our dreams coming true”.

Peter and Peterson also thanked their Coach- Mr. Joel Hamilton for fostering them to be athletes.

Mr. and Mrs Marie Charles- parents of the boys expressed his gratitude to the donors and encouraged his sons to make the most of this opportunity.

Jemma Azille-Lewis- Coordinator of the Child Abuse Prevention Unit under the Ministry of Youth Development and Empowerment, Youth at Risk, Gender Affairs, Seniors’ Security and Dominicans with Disabilities also expressed her gratitude to all the donors towards Peter and Peterson athletic scholarship. Azille-Lewis stated “This athletic scholarship is the first to have happened under the government of Dominica Foster Care Program and having the boys obtained this amazing opportunity is indeed heartwarming”.  This award shows that although life may have it challenges, with determination and hard work, success is possible.  Azille-Lewis also expressed her gratitude to their Coach Mr. Hamilton who paved the way in athletics for the boys and also thanked all those who assisted the boys in enabling Peter and Peterson to travel to Jamaica. She also encouraged the boys to stay focused and informed them that the possibilities are endless with this great opportunity which has been offered to them.

The donors who supported Peter and Peterson include the Dominica Olympic Committee, the Chinese Embassy of the Peoples’ Republic of China, local Chinese companies, the Dominica Football Association, the Law Office of Ronald Charles and Mr. Elvis Morancie. UNICEF also donated laptops to the children.